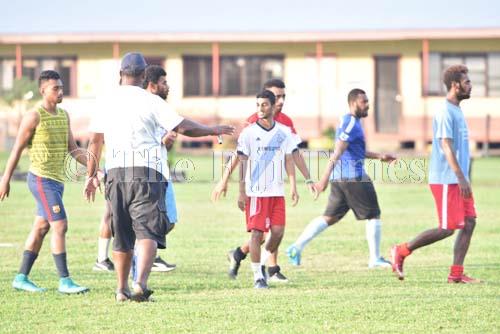 Marika Rodu (second from left), with the Rewa team during a training session. Picture: RAMA/FILE

REWA will bank of its young players to win back to back Vodafone Fiji FACT titles when competition starts at Ratu Cakobau Park in Nausori today. Rewa Football Association president Nazeel Buksh said he was confident of a good outing in the tournament.

“There has been a lot of changes in the team which won last year as we have lost a number of players to the other districts plus we do not have last year’s winning goal scorer Samuela Kautoga,” he said.

“He was also the player of the tournament. “His loss will surely be felt in the tournament, but we are better prepared this time around.”

The Marika Rodu-coached side has five young players who are part of the team for the Fiji FACT.

The players are centre link Mohammed Naizal, Rewa Youth under-19 captain Savenaca Baledrokadroka who plays centre link and centre back.

The side has also roped in Mohammed Ramzan Khan who could play at left link position, Abhishek Pritesh Deo at right back and Paula Kalouniviti in attack.

“We have a young team and I have every confidence in them to do their best for Rewa,” Rodu said.

“There are five youth players and the prospect looks very encouraging and the team looks very amazing with the way they are playing in the practise matches.

The players are responding very well.” The Delta Tigers has won the Fiji FACT title twice –– in 2011 and 2017.