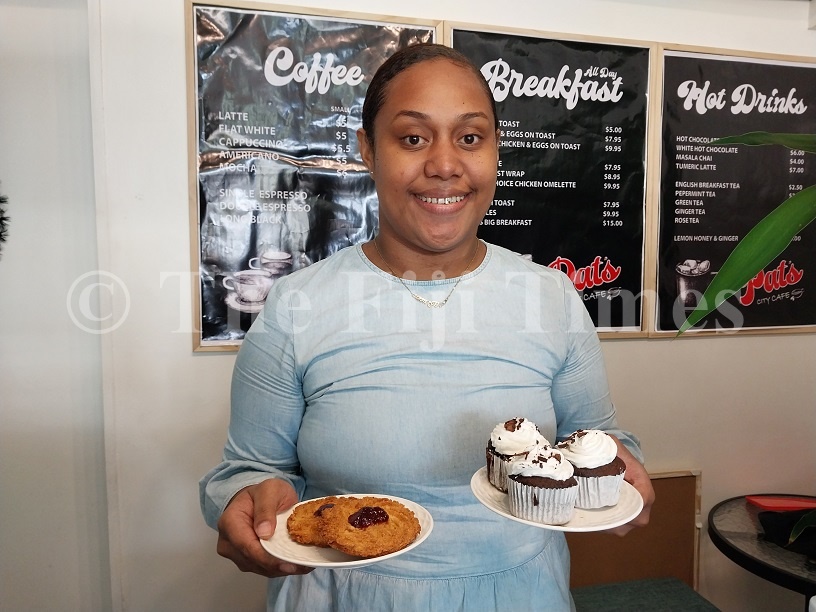 Tucked away in a small space along Butt St in Suva, Pat’s Café presents a homely ambiance to all those who stroll through its doors in search of a meal. As they enter, Emele Volau, is one of the welcoming faces that’s ready to serve them.

Originally from Lomaloma in Vanuabalavu, Lau, Volau lends a helping hand around the small establishment. As one of the few staff members of the start-up eatery, she is learning and growing alongside her co-workers.

A young mum, she also takes this opportunity to learn and hone her skills before she heads back to school to pursue further start studies to become a professional barista.

Her journey has had its fair share of trials and tribulations. Volau shared that she was adopted by her aunt when she was only three months old and later moved with her family to Lautoka.

The Sugar City became her place of residence through her years of childhood.

“My mother was a lecturer at FNU (Fiji National University), which was then the Fiji College of Advanced College so she was a teacher for PEMAC,” she said.

“My mum was transferred to Lautoka when I was small, I went to Jasper High and was in one of the teams for 4×1 relay (4x100m) teams.”

She dropped out of school in Form Six, and got married thereafter.

However, things did not work out the way Volau had planned Despite the difficulties she faced, Volau soldiered on and when she decided to eventually move to Suva, she took on the challenges in her stride.

“So its been a big change for me, but I’m trying my best to adjust to the change because I have my family here.”

Volau said since she had to leave education at an early age, her goal now was to return to school and get qualifications to become a barista.

“I want to become a professional barista so this is the second step. I started working at Island Café and then joined Pat’s Café.

“I love making coffee. I love making designs. I just put all my passion into it so that’s why I’m trying to pursue my dream in that.

“I’m learning from the barista here and this year I want to go back to university.

“To all the young mothers who had given up on having careers, you can pursue your dreams. Do not listen to the negatives. Listen to your heart and follow your dreams.”