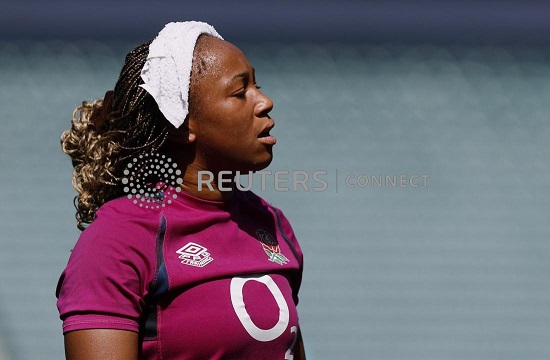 Kabeya, with four caps to her name and a hugely destructive tackler, got the nod ahead of established back rowers Vicky Fleetwood and Sarah Beckett, while second row Talling, also with four caps, was included despite a recent injury scare.

Hunter will continue as captain in her fourth World Cup appearance as England seek a third title having lost in the final to New Zealand in 2017, the fourth time they have lost to them in the final in the last five tournaments.

“While this is a squad announcement and not about singling out individuals, it would be remiss not to reference our captain, Sarah Hunter,” Middleton said in a statement.

“Sarah is a better captain now than she has ever been. She has owned the captaincy and how she represents the squad on and off the field is absolutely brilliant.

“When you work with someone for so long you sometimes need to remind yourself of her outstanding attributes, she is unbelievable in how she conducts herself. Her pride in and love of representing her country is as strong as ever. She is a class act and we are very fortunate to have her leading the side at this tournament.

“We are really confident with the balance of the squad. I am pleased with the way the team is gelling and how our game is coming together. There is still plenty to work on, we expect to improve game-on-game.”

England have won a record 25 tests in a row and are ranked number one in the world going into the tournament, which begins on Oct. 8 when they face Fiji in their opening Pool C game. They will then take on France and South Africa. The final is in Auckland on Nov. 12