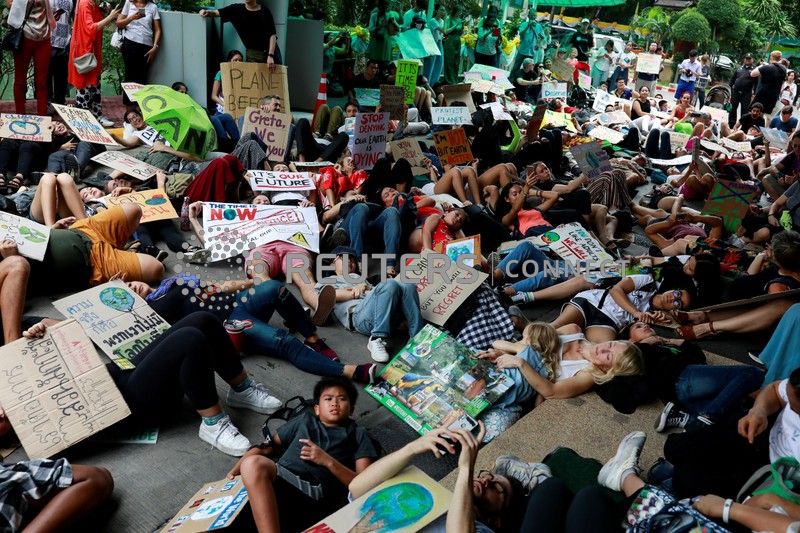 Environmental activist play dead as they participate in a Global Climate Strike near the Ministry of Natural Resources and Environment office in Bangkok, Thailand September 20, 2019. REUTERS/Soe Zeya Tun

BANGKOK (Reuters) – More than 200 young people in Thailand stormed into the environment ministry on Friday and dropped to the ground feigning death as they demanded government action on climate change along with thousands of strikers around the world.

The young strikers were chanting “Save our Earth” as they marched into the government compound, before lying down on the ground to play dead.

“This is what will happen if we don’t act on climate change now,” said one of the strike leaders, Nanticha Ocharoenchai, 21.

“Today we are demanding that the Thai government declare a climate emergency and stop using fossil fuel.”

Young children were seen carrying coloured placards in one hand and holding a parent’s hands in the other.

One teenager also held a poster that read, “The planet is getting hotter than my imaginary boyfriend.”

The Bangkok strike was part protests taking place in some 150 countries on Friday, inspired by the 16-year-old Swedish activist Greta Thunberg, who urged students and others from around the world to speak in one voice about the impending effects of climate change on the planet.

“We’re skipping school because teachers teach us how to work in the future, but if we don’t do this, there will be no future for us to work in,” said Peem Prasertsuntarasai, 11.

“So what’s the point of studying in school if the world’s gonna be gone?”

A senior official at the Ministry of Natural Resource and Environment came out to accept a letter from the students, saying he was supportive of the student action.

“This is how young people express their concerns, which we deem as a good sign and not at all a nuisance,” Adisorn Noochdumrong, deputy permanent secretary of the ministry, told Reuters. “We encourage it.”