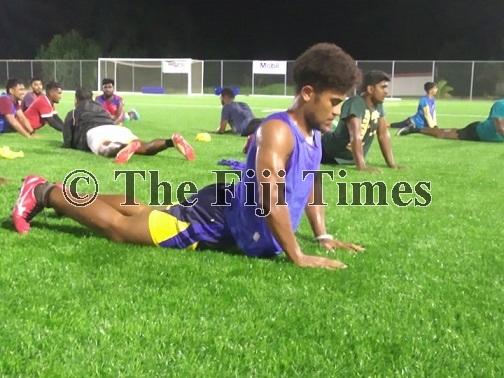 Thomas Dunn(closest to camera) trains with the Navua football side at the Uprising Beach Resort ground yesterday. Picture: ROHIT DEO.

Former Fiji under-16 national football rep Thomas Dunn has set his eyes on an overseas contract in the near future.

The current Navua rep says he is looking forward to the resumption in football.

“Really looking forward. It has been a long break. Wanting to get back on the field soon,” he said.

The 17-year-old Vashist Muni College Year 12 student says he wants to get an overseas contract in future.

“I hope to get an overseas contract. I think I can reach that stage and stay there but for now it’s all about representing my district.”

Dunn is pleading with fans to come out in numbers as he and the Navua side plays two friendly matches against Rewa this weekend.

The matches will be played on Saturday and Sunday at Uprising Beach Resort in Navua.

Both matches kick off at 1pm.

Meanwhile, Navua resumes its Vodafone Premier League campaign against Ba at the academy Grounds in the west at 3pm next Saturday, July 11.