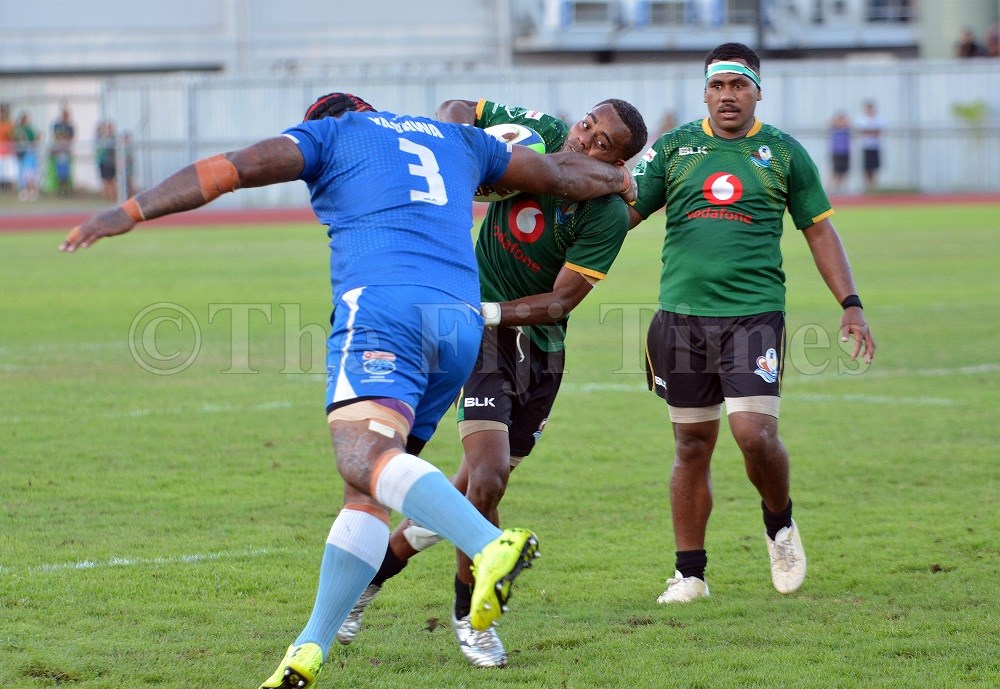 Bua’s Mosese Nayaukawa tries to evade a tackle by a Yasawa player during their Bainimarama Shield challenge at Churchill Park in Lautoka. Picture: BALJEET SINGH

Yasawa will be working on its second-half shortfalls ahead of the final Bainimarama Shield defence against Macuata next week.

The Iliesa Tanivula-coached Yasawa team managed to hold off a resurgent Bua side in the second match of the series 29-20 at Churchill Park in Lautoka on Friday evening.

This is after leading 26-3 at the break. It was a game of two halves with Yasawa dominating the first and Bua threatening in the second.

Winger Savenaca Uluibau sparked the holders into action opening the scoring in the 14th minute with the first try. The conversion by fly-half Kaveni Varo failed.

Yasawa stepped from there on with the forwards combining well with the backline.

Prop Viliame Tiritiri dotted down in the 23rd minute.

Sainivalati Qoro scored out wide for Yasawa in the 32nd minute with Varo succeeding with his third conversion. Yasawa held a handsome 23 points advantage at the break.

Bua surged into attack from the restart. Replacement Ratu Luke Donumaibulu raced down the left touchline to dive over for Bua’s first try in the 45th minute. Rokotuiloma converted and then succeeded with his second penalty.

Varo nailed a penalty at the other end for Yasawa to make it 29-13 in their favour.

Bua kept their hopes alive for a late comeback when Nemani Biu drove his way over near the left corner flag following a quick tap penalty in the 74th minute.

Rokotuiloma nailed the conversion to make it a nine point ball game with five minutes remaining on the clock. Tanivula said the game plan was to start strongly.

“For the second game in a row, it was a game of two halves,” he said. “I just can’t put my finger on where we are going wrong in the second-half.

But credit to the guys the way they played in the first-half as we were 23 points ahead. We could not have asked for anything better.”

“We got three points today compared to nothing the other week against Ba. We need to sit down with the coaching staff to see where the weakness is because this is a real concern.”

He said Yawasa was the most experienced team, but they proved that they could do it to make it to the top tier.

“We lost to them by a point in the semi-finals in the Vanua Championship and then won the second-half against them in the Bainimarama Shield,” Sigarara said.

“We hope to prepare better for next year.”

After being down 3-26 at the break, Bua staged a second-half comeback. Sigarara said the message at halftime was to get more aggressive.

“They had to do their best because they left their home to play here on Viti Levu, so they lifted the intensity.”

Yasawa will defend the shield against Macuata next week.