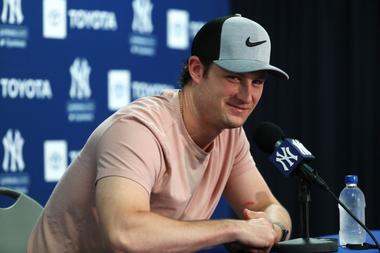 (Reuters) – The Yankees and Astros traded barbs over the recent sign-stealing scandal on Thursday, but the Bronx Bombers were feeling great about the competitive edge they grabbed this winter by signing away Houston’s hard-throwing hurler Gerrit Cole.

“It’s an exciting day,” Yankees manager Aaron Boone told reporters after the first full Spring Training workout of pitchers and catchers at Steinbrenner Field ahead of the 2020 season. “We obviously have big expectations. We look forward to the long process of trying to chase a championship.”

Yankee fans just endured the first decade since Babe Ruth and the Roaring ‘20s without a trip to the World Series, losing a bid to reach the Fall Classic in 2017 against the Astros, who were disciplined last month by Major League Baseball for breaking the rules by using electronic equipment to identify upcoming pitches and relaying the information to their hitters.

The winners of a record 27 World Series titles, the Yankees are fired up about arranging another tickertape parade down Manhattan’s Canyon of Heroes.

“We feel like he (Cole) is that anchor at the top,” Boone said of the fireballer they signed to a record nine-year $324 million deal after winning 103 games last year before falling in the playoffs.

Across the state at their training complex in West Palm Beach, Astros owner Jim Crane addressed the scandal that led to Houston firing their manager and general manager, and cost the club a $5 million fine and loss of top draft picks in 2020 and 2021.

“I want to say again how sorry our team is for what happened. I want to also repeat this will never happen again on my watch,” Crane said. “We’re apologizing because we broke the rules.”

“That didn’t impact the game,” he added of Houston’s 2017 World Series triumph. “We had a good team and won the World Series.”