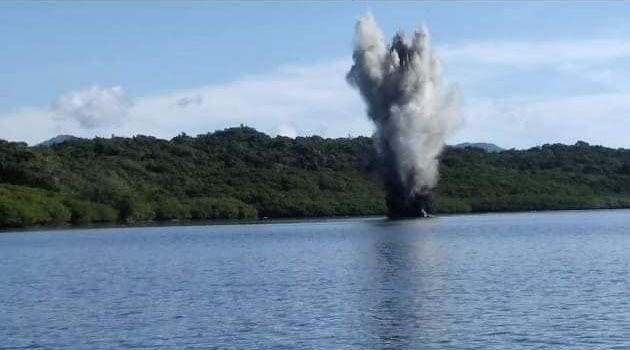 Detonation of the bomb at veivatuloa in Namosi. Picture: ITAUKEI AFFAIRS BOARD

Villagers of Veivatuloa in Namosi are relieved after the detonation of a World War II bomb that was found in the area.

Republic of Fiji Military Forces (RFMF) land force command-operations confirmed on Friday that a team from the RFMF’s explosive ordnance disposal (EOD) was deployed to the village to conduct the operations.

Assistant Roko Tui Namosi Sairusi Qaranivalu said the safe detonation of the bomb by the Fiji Military explosive experts was something the people of Veivatuloa had been waiting for because of the risks it posed to them.

He said the bomb had been a cause of anxiety to the people of Veivatuloa and those leaving near the area.

“The people of Veivatuloa have requested through the Bose ni Tikina and Bose ni Yasana for the safe detonation of the explosive, and now they are finally at ease knowing that their safety is secured,” Mr Qaranivalu said.

Veivatuloa Village headman Leone Nairuwai said according to stories passed down from their elders, there were two bombs that were dropped by an American fighter plane during World War II after the pilot was shot.

Mr Nairuwai said one of the fighter plane bombs was dropped into the ocean and was never found while the second was found along the coast of Veivatuloa near Togoru.

In 2004, villagers of Naivucini in Naitasiri found the wreckage of the plane and the remains of the fighter pilot was returned to his homeland 64 years after he disappeared.