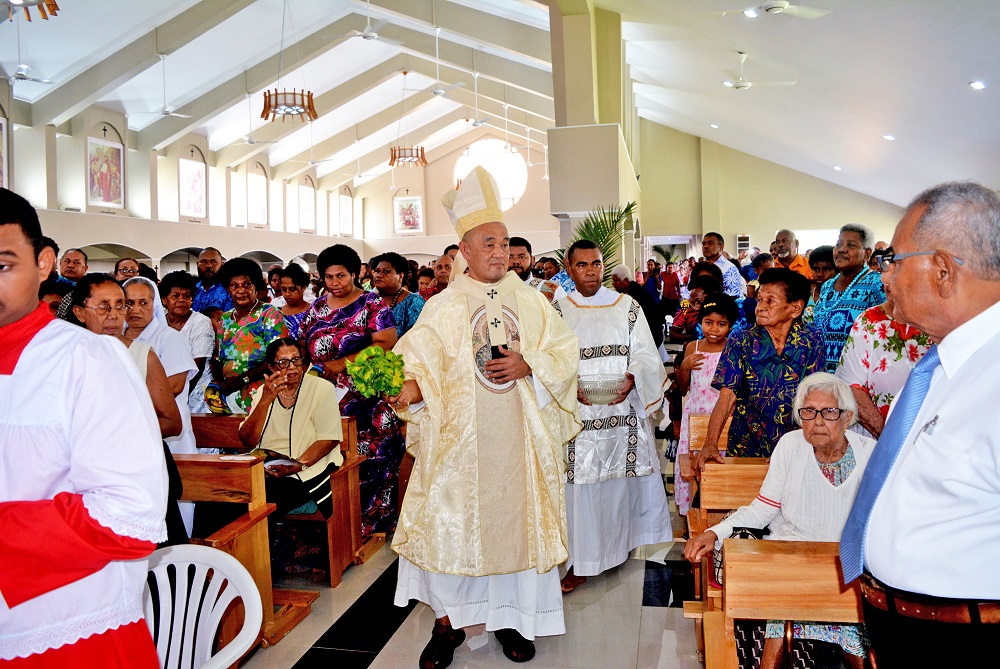 Head of the Catholic Church in Fiji Archbishop Peter Loy Chong sprinkles the holy water during the opening of the renovated Our Lady of Perpetual Help Catholic Church in Lautoka. There there will be strictly no masses, devotions or church gatherings of more than 20 people conducted in Catholic churches. Picture: REINAL CHAND/FILE

The head of the Catholic Church in Fiji says it was looking forward to the opening of houses of worship when Fiji was declared COVID-19 free last Friday.

Archbishop Peter Loy Chong said worship centres played a critical role during crises and it was important they be opened as soon as possible.

He said religion helped people find meaning in the midst of suffering and chaos.

“If they have no more COVID-19 patients then there is no reason as to why they are still closing down places of worship,” he said.

“In times of uncertainty like this, when things are little bit chaotic and when people don’t have money and children are at home — a basic need for people is to be able to put things in order in their mind and religion serves that purpose.

“That is why it’s important to open up churches for people to come and pray.

“When people can’t put things together or find meaning, that’s when they find other ways to try to handle it — whether it is alcohol or even suicide.”

Archbishop Loy Chong said Fiji was a religion oriented state and its social connections were strong compared with other countries that were too secular.

Prime Minister Voreqe Bainimarama announced on Friday that all 18 COVID-19 cases had been cleared and there were zero confirmed cases in Fiji.

He said Government was busy preparing for the launch of CARE Fiji, a new mobile phone app which would boost contact tracing efforts.