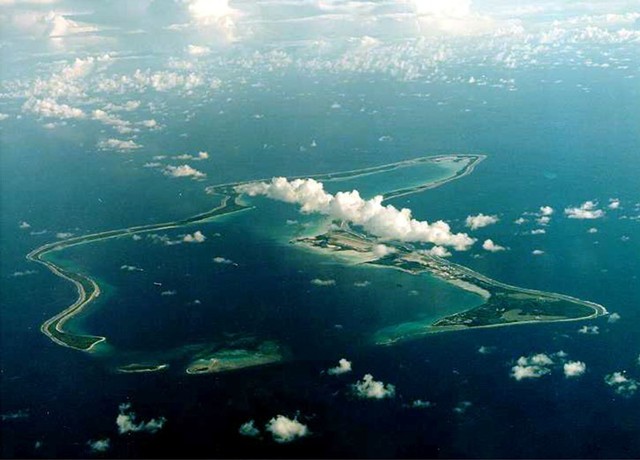 FILE PHOTO: Diego Garcia, the largest island in the Chagos archipelago and site of a major United States military base in the middle of the Indian Ocean leased from Britain in 1966./File Photo

THE HAGUE (Reuters) – Mauritius tried to persuade judges at the World Court on Monday to find that it was illegally stripped by Britain of another Indian Ocean archipeligo, the Chagos Islands, now home to a major U.S. air base.

The case at the International Court of Justice in the Hague is a test of whether colonial-era deals struck by great powers and small states that later gained independence are legitimate, given the power imbalance.

Britain in 1965 detached the Chagos Islands from its colony of Mauritius, which became independent three years later while the sparsely populated Chagos remained overseas British territory.

The United States has leased the Chagos Islands’ biggest island, Diego Garcia, since 1966 and has built an air base there, while the entire population of around 1,500 people was forced to leave.

In 2017, Mauritius petitioned the United Nations to seek an ICJ advisory opinion on the legality of Britain’s colonial-era move.

Despite opposition from Britain and the United States, which views the Diego Garcia base as a vital military asset, the U.N. General Assembly referred the matter to the ICJ, commonly known as the World Court, in 2017 for an advisory opinion.

Although ICJ opinions are not binding, they carry weight under international law.

The case was argued by elder statesman Anerood Jugnauth, 88, who served for nearly 30 years during four stints as prime minister or president of Mauritius from 1982-2017, and now holds the post of “minister mentor” in a cabinet led by his son.

UK solicitor general Robert Buckland told the court it should decline to issue any opinion on the matter, which he argued was better suited to bilateral negotiations.

The people displaced from the Chagos Islands have lobbied for years to be able to return. In 2016, Britain’s Foreign Ministry extended Diego Garcia’s lease until 2036, and declared the expelled islanders would not be allowed to go back.

Outside the court in The Hague, a small group of Chagossians gathered to protest. They unfurled banners denouncing “modern slavery” and called for Chagossians to be allowed self-determination.

“I want the world to see that we are still suffering,” Isabelle Charlot, whose father was born on Chagos, told Reuters.

Buckland accepted that the removal of the Chagossians and their treatment thereafter “was shameful and wrong”, but said it had already been resolved in a 1982 agreement on compensation.

More than 20 interested parties, including the African Union, have asked to take part in the hearings. No date has been set for a decision.