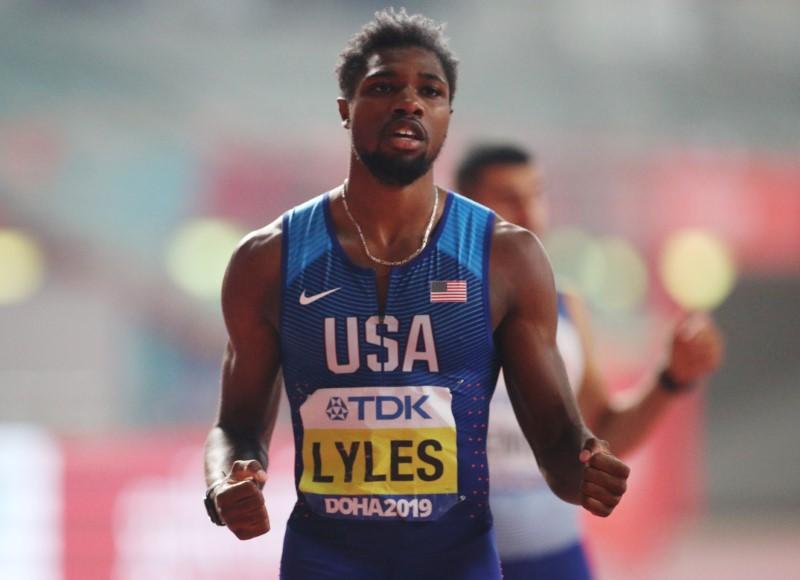 (Reuters) – With allergies and asthma, world 200 metres champion Noah Lyles believes he is “kind of a risk factor” as the coronavirus pandemic spreads.

The American sprinter is keeping a close eye on his diet and washing his hands constantly, he told a teleconference on Tuesday.

“It is kind of a little bit scary because I did have the swine flu back in the day (as a child), so I know my body is susceptible to catching, maybe a little bit easier than others, so that is why I have got to work it harder,” he said.

There was some relief for the 22-year-old on Tuesday, therefore, when the Tokyo Olympics, where he was expected to shine, were postponed until 2021 by the International Olympic Committee (IOC) and Games organisers.

“It was a little relief to see that the Olympics have decided to postpone because my first concern was that everyone would be healthy and everybody would have a fair place to compete,” said Lyles, who hopes to make a big splash when the Games are held by going for gold in both the 100 and 200 metres and 4×100 metres relay.

He also hopes there will be a 2020 athletics season and is training with that objective.

With Americans being asked to be careful in making contact with others, Lyles is spending more time inside playing video games and making music, two of his favourite pastimes.

“I don’t think anybody was really prepared for this virus happening,” Lyles said. “I just see this as more time to hone my skills (athletically). I’ve been doing really, really well in training.”

Yet his training has changed and he describes his new routine as “weird and different”.

Instead of working out on a track, Lyles and his training group have found a park-like setting and have been running on a path with hills and green grass where sprinting is a challenge if possible at all.

“We are in like groups of six and we are all coming at different times,” he said, following U.S. health authorities’ requests that people keep their distance from each other when in contact.

“It’s all about an hour or two and then go back in quarantine.

“It’s a little bit of something not to go like crazy.”

At home in Florida, he is “doubling down on my video games and a little bit of music”.

“Me and my friend have been working on a song recently, getting really close to finishing up an EP (extended play) which I was planning on releasing in the next few months,” Lyles said.

“It’s a little saddening this (virus),” he added. “But we are all going through it.”