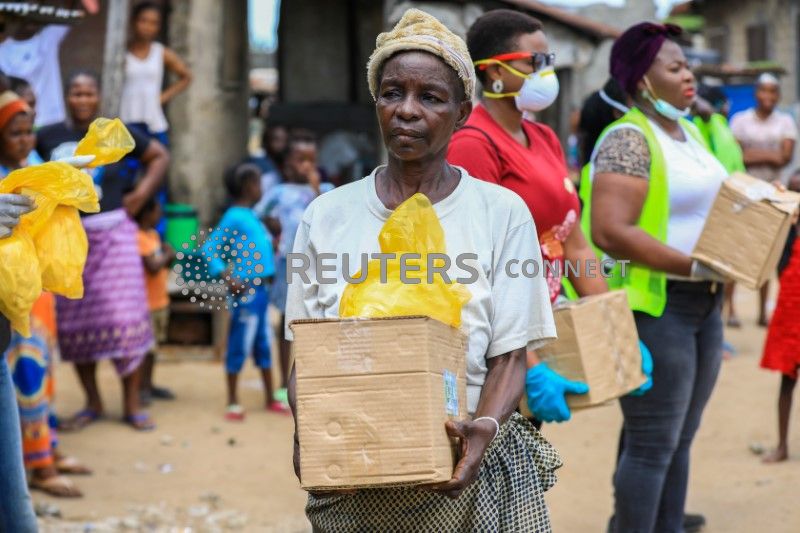 FILE PHOTO: An elderly woman is seen with a food parcel she received from volunteers at a relief distribution, during a lockdown by the authories in efforts to limit the spread of the coronavirus disease (COVID-19), in Lagos, Nigeria April 9, 2020. Picture taken April 9, 2020. REUTERS/Temilade Adelaja/File Photo

WASHINGTON (Reuters) – The World Bank said on Tuesday that it expects the coronavirus and resulting recessions to leave “lasting scars” on developing and emerging market countries, with the worst damage on oil exporters and those suffering financial crises.

In analytical chapters of its new Global Economic Prospects report, the bank said that the average emerging market country suffering a financial crisis could see potential output fall by 8% over a five-year period, with lost output for developing oil exporters falling 11%.

World Bank officials said that because the growth outlook had already dimmed significantly due in part to trade conflicts, the shock from the pandemic could easily spill over into solvency problems for emerging market countries.

Low interest rates over the past decade contributed to a record increase in sovereign and corporate debt in emerging markets, limiting policymakers’ ability to respond to the crisis and prevent business closures, job losses and deterioration of human capital, said Ceyla Pazarbasioglu, vice president for equitable growth, finance and institutions.

“If policies are totally targeted to sustain vested interests or zombie companies, this can lead to liquidity problems that turn into solvency problems,” Pazarbasioglu said.

“What is really needed now is urgent measures to limit the harm and damage, but also staying away from policies that can lead to this health crisis, which has turned into an economic crisis, turning into a financial crisis.”