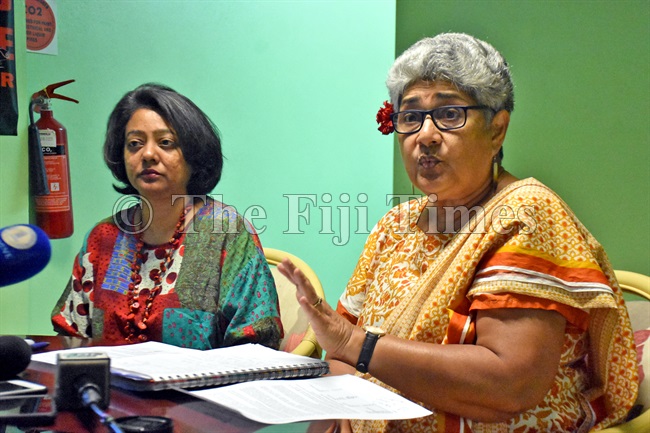 Shamima Ali (let) of FWCC at a joint press conference with Sashi Kiran of FRIENDS Fiji in Suva, on Tues 10 May 2022. Picture: ELIKI NUKUTABU

The heads of two organisations actively engaged in poverty relief have raised serious concerns about a recent World Bank report which revised Fiji’s poverty level down to 24.1 per cent from 29.9 per cent.

Fiji Women’s Crisis Centre co-ordinator Shamima Ali and FRIEND Fiji director Sashi Kiran claimed the report did not reflect what they were seeing on the ground.

Both said they could not fathom how poverty had declined, according to the report, and Government was using the 24.1 per cent poverty rate as an indication that the country was doing well after 115,000 people had lost their jobs during the COVID-19 pandemic and there was no clear data as to how many had returned to fulltime work.

At a media conference yesterday, they called on the Government to explain why the 2019-2020 Housing Income and Expenditure Survey report was no longer available on the Fiji Bureau of Statistics website, and called on the World Bank to explain why it took them eight months to realise they had made a “mistake”.

Ms Ali said they were concerned there was no mention of the Fiji Bureau of Statistics in the World Bank report.

“They are quoting the Household Income and Expenditure Survey (HIES) and we are questioning whether the World Bank has now become our Bureau of Statistics,” the human rights activist said.

“Eight months later after all due diligence and everything was done, World Bank now has come up with this.

“There are many unanswered questions here.

“We haven’t been given any reasoning, any justification, and so on for them stating that 29 per cent has come down to 24 per cent, there has been this large drop in poverty.”

Ms Kiran also said the data was collected from February 2019 to February 2020, while the COVID-19 pandemic began on March 2020.

She said the data was “old” and collected prior to the pandemic that devastated the economy over the past two years.

Ms Kiran said people had lost their jobs and were even now struggling to put food on the table for their families.

“When Fiji Bureau of Stats released the report, they said it has gone through due diligence with all the different partners and World Bank was one of the partners, what happened during due diligence, why didn’t World Bank pick it up then,” Ms Kiran said.

The World Bank revised report said it should be noted that 2019-20 poverty estimates were based on consumption per capita and could not be compared directly with the 2013-2014 poverty measures which were based on income.