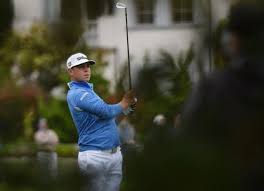 June 15, 2019; Pebble Beach, CA, USA; Gary Woodland plays a shot on the 16th hole during the third round of the 2019 U.S. Open golf tournament at Pebble Beach Golf Links. Orlando Ramirez-USA TODAY Sports Without a

PEBBLE BEACH, CA. (Reuters) – Gary Woodland will take a wafer-thin one shot lead into the final round of the U.S. Open on Sunday, looking over his shoulder at hard-charging major winners at Brooks Koepka and Justin Rose.

Without a top-10 finish in his first 27 majors, Woodland has only recently become a factor at golf’s top events and says he is fully prepared for a pressure packed Sunday with some of sport’s biggest names breathing down his neck.

Woodland held steady on Saturday but by the end of the day saw a four shot advantage after eight holes chopped to a single stroke when Rose birdied his last to set up what should be a compelling final round at the Pebble Beach Golf Links.

The 2013 U.S. Open winner, Rose has spent the entire week at or near the top the leaderboard thanks to some red-hot putting that has left the Englishman one back and well-placed to make a run at a second major.

Despite a lack of results at the majors, going out last will not be a completely unfamiliar experience for Woodland, who held the 36-hole lead at the 2018 PGA Championship and played the weekend with Tiger Woods and two-time U.S. Open champion Koepka.

“I’ve obviously played well the last couple majors I’ve been in,” said Woodland after Saturday’s round. “I’ll be rested for tomorrow. I’m comfortable with my game. I’m playing good.

“We’re at Pebble Beach for the U.S. Open. It should be exciting.”

The golfer everyone will be watching is defending champion Koepka who is lurking just four back with his sights firmly set on becoming the first player in over a century to sweep three consecutive U.S. Opens.

The world number one has not yet fired on all cylinders but a bogey free 68 on Saturday was a clear warning the power-hitting American has his game primed for a run at history.

Not since Willie Anderson in 1903, ‘04 and ‘05 has a golfer hoisted the trophy in three consecutive years.

Not to be overlooked is another former U.S. Open champion Northern Irishman Rory McIlroy sitting five off the lead.

No one has ever won the U.S. Open after winning an event the week before but McIlroy, coming off a rampaging win at the Canadian Open, has remained in contention despite some wildly inconsistent play.