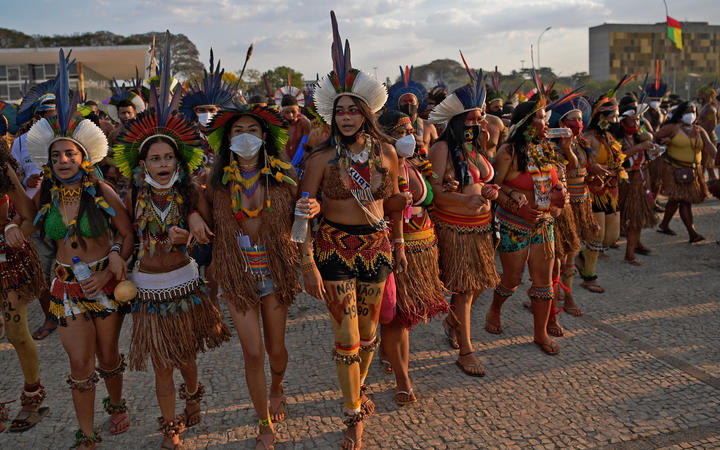 Women are still missing at the top climate table, warns a human rights lawyer from the Pacific.

Only a handful of female leaders including New Zealand Prime Minister Jacinda Ardern are on the United Nations’ climate panel.

Many governments claim that 45 per cent of their COP26 teams are women.

But Fijian Kavita Naidu, who specialises in climate change, criminal and refugee law, said many of these women were not negotiators involved in the high-level discussions.

The Greenpeace executive, who was in Glasgow, said the world “desperately” needs more female leaders making the decisions on climate change.

“We are, like, the minority in the leadership space,” Ms Naidu said.

“There’s 10 of us out of the 140 other leaders and that just tells you that gender inequality remains a real problem and this is not just in the COP process but generally.

“This is setting an alarming trend for observer participation in these very important discussions because we are the ones who hold our leaders accountable to the promises that they make here, back when we go home.

“We don’t have enough women, who are meaningfully able to do that here, and this is a huge problem.”

The world as designed by men has destroyed many things, delegates were told this week as leaders and campaigners warned that the climate crisis could not be ended without the empowerment of women.

Women and girls around the world suffer disproportionately from the impacts of climate breakdown, as they are on average poorer, less educated and more dependent on subsistence farming.

A UN report found 80 per cent of those displaced by the climate emergency are women.

Åsa Regnér, from UN Women, told the conference that only 3 per cent of the climate overseas development aid actually target women’s rights and gender equality specifically.

“The UN, with its convening power, should really address that because as long as we don’t have the resources, little will happen.

“If we are to win the fight against climate change, we need to have women participating equally in climate action,” Ms Regnér said.

Some countries announced the climate projects they funded would have to incorporate gender equality.

Alok Sharma, the UK minister and president of COP26, said the world knows that from its efforts to tackle climate change – “it is more effective when we put women and girls at the heart of those efforts.”

Climate-related events will prevent at least four million girls in lower-income countries from completing their education in 2021, Mr Sharma said, as he cited a Malala Fund report.

On current trends, the climate crisis will contribute to at least 12.5 million girls not completing their education each year, the report said.

“That is an absolute travesty and a dangerous one,” Mr Sharma said.

“Because, as well as being a fundamental good in itself, education empowers girls and equips them to deal with the effects of climate change and to take climate action.”

Mr Sharma announced that the UK was giving $US190 million ($F399m) to tackle climate change while addressing gender inequalities.

While climate change affects all countries and all people, it is widely accepted that vulnerable populations – the poor, those with unstable food and housing, and those who rely on agriculture – are more at risk of experiencing the adverse effects of unpredictable weather patterns, less food, unsafe water and unstable living conditions, said Kavita Naidu.

She said women and girls already face gender inequality and when disaster strikes, increasingly due to climate change, they are the ones who face unique struggles in the aftermath.

After ‘walking’ about 8000 miles across Europe, Little Amal, a giant puppet representing a young Syrian refugee girl, arrived in Glasgow to mark Women’s Day at COP26 this week.

The 3.5-metre-tall living artwork walked up the stairs and joined Samoan activist Brianna Fruean for a hug and a gift exchange.

Ms Fruean gave her a flower, representing hope and light, and Amal gave the young Pacific climate warrior a bag of seeds in return.

“Both of us have embarked here for a journey, from two very different places, but we are connected by the fact that we are living in a broken world that systemically has marginalised women and girls. Especially women and girls from vulnerable communities,” Ms Fruean told the plenary.

The student at Auckland University reminded participants that the brunt of the climate emergency which amplifies existent inequalities is often felt harder by women.

“Amal brought seeds to physically share, to inspire, seeds represent hope. The beautiful thing about seeds is that you have to be selfless enough to be content in the fact that you might not eat the fruit or bear the flowers, but feel it was worth it knowing that your children will live with its beauty,” she added, using seeds as a metaphor for the decisions being taken at COP26 for the future of our planet.

Ms Fruean also highlighted that seeds need to be watered, pruned and nurtured to bear fruit and flowers, inviting delegates to keep up their work after the conference finishes.

“I will plant these seeds out when our ministers are ready, but I hope that within the negotiations you are able to plant them and when we leave COP, you’ll tend to them so that they’ll grow into a beautiful world that is deserving of girls like Amal and deserving of having all girls be safe in it.”

The two-week UN climate conference in Glasgow ended over the weekend.