IN July, 1973 closely related women and high-ranking in terms of chiefly status, gave up their Fijian hairdo known as buiniga for a solemn purpose.

The mass haircutting was done to mark the mourning ceremonies of the late Ratu Sir Edward Cakobau on Bau Island.

Among the Fijian women of royal class was Adi Lady Lala Mara, the wife of then prime minister of Fiji, Ratu Sir Kamisese Mara.

For the occasion, women were heavily garbed in black attire and sat in the traditional women’s sitting position, their hair trimmed. 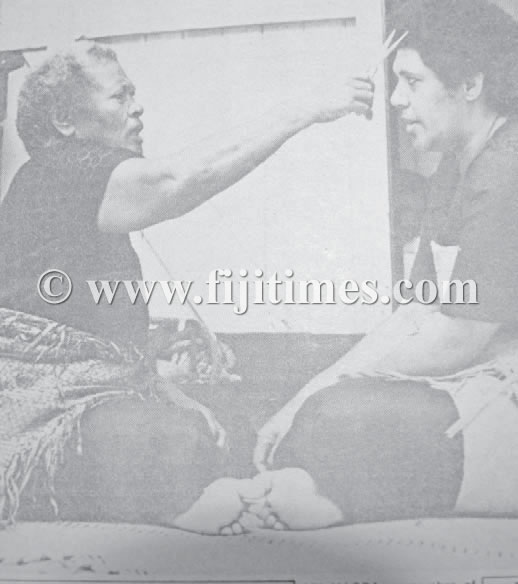 Adi Lady Lala Mara gets a haircut from Adi Maopa, a member of the Tui Kaba clan. Picture: FILE

Their heads were bowed and they spoke in whispers.

Two hundred years before the 1970s, their little fingers known as loloku ni mate, would have been chopped off instead and widows would have joined their husbands by being strangled to death or buried alive.

The Fiji Times of July 4, 1973 reported on the mourning ceremonies observed by women, which are infrequently practised today.

The paper said 12-feet away from the main group of mourning women was the main dais where, four days before, the body of Ratu Sir Edward lay in state.

“Now they will begin the ancient chant of vakavidiulo, a widow’s lament for the body of her husband wasting away in death,” The Fiji Times reported.

“At precisely 8pm, an elderly woman’s voice is raised in a mournful wail and the opening phrases of the chant begin. It is interspersed with an intricate rhythm of hand claps.

At 8.10pm the chant abruptly stops.” The Fiji Times said from the rara below, “a tattoo of sounds erupted from the darkness”, as other women beat sticks called vakatilatila.

This noise gradually died out as well. Three of Ratu Edward’s sons then joined the women in the house of vigil and served the
ladies with yaqona as a token of appreciation for participating in the various mourning rituals.

Another chant erupted after the yaqona ceremony was over. “It is lively and sung with exuberance in contrast with the vakavidiulo,” The Fiji Times noted.

The ore was also featured, which is a traditional fine or punishment for making noise during the funeral observance.

It was placed by Cakaudrove chief Ratu Sir Penaia Ganilau on a group from Macuata for breaking traditional protocol.

Ratu Edward was a member of Fiji’s legislature and served as minister for commerce, industry and labour and deputy prime minister.