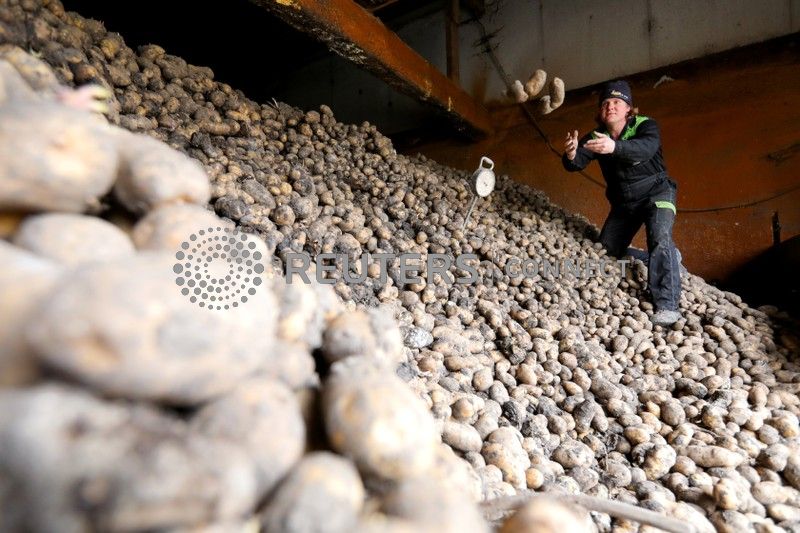 A farmer is pictured among a large stock of potatoes that he can’t sell to restaurants or catering services, as they are closed due the coronavirus disease (COVID-19) outbreak, at his property in Purmer, Netherlands, April 3, 2020. REUTERS/Eva Plevier

BEEMSTER, Netherlands (Reuters) – It’s potato planting season, but many Dutch farmers are facing a mountain of a problem, with a million tons of potatoes left over from last season due to the coronavirus outbreak.

Restaurants in the Netherlands, many serving popular deep fried “patat”, have been closed since mid-March, with a ban on public gatherings set to last until June 1 at least.. With their closure, the market for potatoes collapsed overnight.

“This is a dramatic season, a turn of events no one could have predicted,” said Dirk de Heer from his farm in Beemster, in North Holland.

De Heer says he is selling his crop to a dairy farmer for 0.01 euro per kilogram, instead of the 18 cents he had hoped to receive.

De Heer is one of around a thousand farmers in the Netherlands in the same situation.

Food potato production in the Netherlands is roughly 4 million tons annually, of which a quarter is exported.

The country’s agricultural organization LTO estimates damages from the virus outbreak so far at 6 billion euros, with the floral industry also hard-hit.