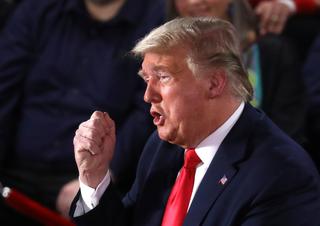 WASHINGTON, March 28 (Reuters) – President Donald Trump offered a preview of his re-election campaign playbook last year when he visited the building site of a multi-billion-dollar cracking unit in western Pennsylvania, hailed as one of the largest construction projects in the country.

To Trump, it was a pitch-perfect example of a booming economy.

Except today, the site sits largely empty, after the coronavirus outbreak forced oil company Royal Dutch Shell to halt construction. The project’s thousands of workers are now unemployed, adding to the nearly 3.6 million Americans who filed for jobless benefits in the last two weeks.

The tension between wanting to keep workers safe from infection and trying to get back to business as soon as possible illustrates the fine line Trump must walk as he floats the idea of reopening the U.S. economy in defiance of the advice of public health experts.

Seven months before he faces re-election, Trump must find a balance between trying to stop the economy from spiraling into a severe recession while appearing to act decisively to contain a still-expanding health catastrophe.

Trump has been under increasing pressure to ease back economic restrictions from his Republican base, who consistently have been less alarmed than Democrats about the virus, which has infected more than 85,000 Americans and killed more than 1,200.

A March 18-24 Reuters/Ipsos poll shows 76% of Democrats agreed that the coronavirus is a “serious threat to me and my family” compared with 63% of Republicans.

Many workers at the Shell site in Potter Township, 40 miles (65 km) east of Pittsburgh, live paycheck-to-paycheck and are eager to work. But some are concerned about Trump’s suggestions that the U.S. economy could be re-opened by Easter on April 12.

“If they called me and said come back to work Monday, I would not go. Not until I feel it’s safe for me and the other workers,” said Jonathan Sailers, a 34-year-old union insulator who wraps pipes at the site.