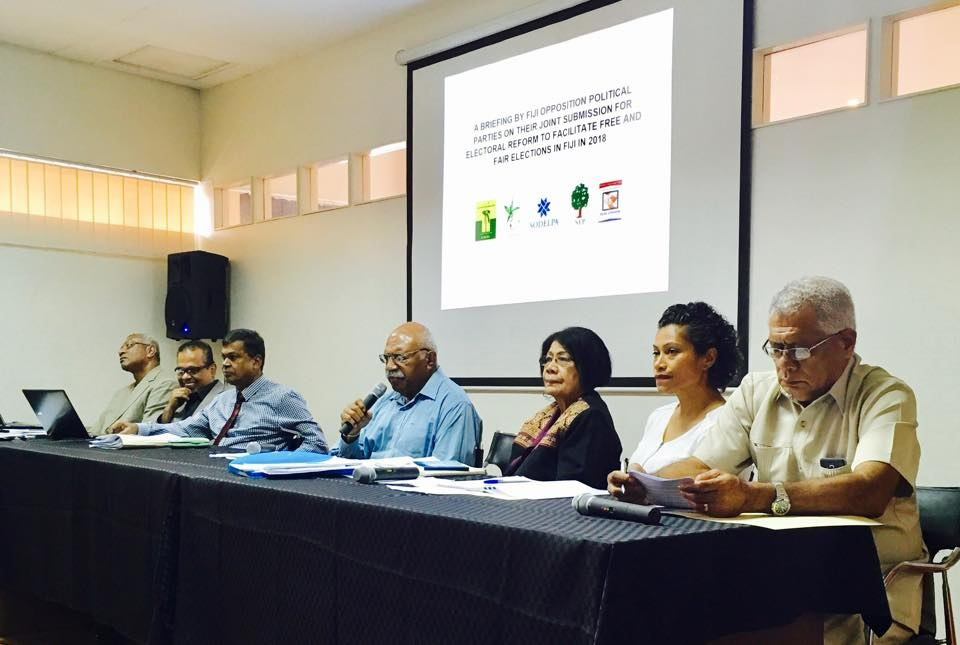 All of us in the opposition political parties believe the FijiFirst party is leading Fiji towards economic and social disaster. And we know that most of Fiji’s people want them gone.

We have had a bad government that has spent most of its time and energy polishing its image and pretending it is a good one and making sure they are never criticised.

At least the FijiFirst government has done a good job at this. They have positioned politically sympathetic people in Government media organisations. They have used their control of companies like Fijian Holdings Limited to control others.

They have even bought newspaper support through exclusive advertising contracts.

This means that no one really knows how their big promises and policies are working in real life. Most media organisations will not talk about “the reality of the matter”.

The FijiFirst government loudly claims political credit for even the smallest things. They think we have forgotten that all governments since Independence have made new things happen. Because that is what all governments do. That is their duty, with the taxes we pay them.

The FijiFirst government was born out of a military coup. And the bad governance, bad policymaking, bullying and thuggish behaviour we see now is because they have been ordering people around from Day One.

They have never had to start from the bottom like the rest of us, talking to people, listening to their problems, asking for their views and winning their support by earning trust.

They get elected by talking about things that create fear, making people anxious about their security and throwing around our money – taxpayers’ money – on well-timed freebies.

Remember 2018? $14 million in “small enterprise grants” were handed out in the last four weeks before the election! And they will use public servants and taxpayer-paid advisory councillors, town and city administrators and even the local turaga ni koro to effectively campaign for the Fiji First Party.

We can expect the same tactics before the next election. In fact we have to plan for worse than this.

A lot of people want the opposition parties to “get together” and fight the elections. We agree. But we need to be smart about this. And we also have to do it in a way which respects people’s right to choose the party they want under a system of rules we did not make.

If we were to all join forces and form a new coalition political party, we would have to go through a new party registration process – getting thousands of signatures from around the country, filing applications to the Elections Office and so on.

That is a lot of work for parties who have only limited resources. We are not like the FijiFirst party. We do not have millions of business people’s dollars in our bank accounts.

We would have to merge our money and accounts systems, get new declarations from party officials and have one system for our own party administration. The electoral laws demand a lot of paperwork.

All the Opposition MPs would lose their seats in Parliament, because under the Constitution they must stay with the same party under which they were elected.

So while it may be easy for small parties with no Members of Parliament to get together, it is impossible for the bigger parties to merge into one.
Fiji’s voting system

The current electoral system is different from the old “first past the post” system with individual constituencies and the “winner takes all” voting method that previously applied.

Now, every party that gets more than 5 per cent of the total vote will get its share of the 55 seats in the next Parliament.

This is proportional representation (though it is complicated by a specific way of allocating seats, the D’Hondt method, which sometimes affects the simple mathematics – and which took away one seat from NFP in 2018).

Then these two parties can get together, after the election, to form the Government. And that is what we believe will happen.

However small parties can negatively affect this outcome. If a small party does not get 5per cent of the total vote, all of its votes are effectively wasted. These are subtracted from the “base” of voters used to allocate the seats. That means that the Fiji First

In the 2018 elections, the Unity Party, the HOPE Party and Fiji Labour Party between them received just over 12,500 votes.

None of them reached the 5 per cent threshold to qualify for parliamentary seats.

If those votes had all gone to NFP or SODELPA, then the results would have been different.

Between them NFP and SODELPA would then have held 27 or 28 seats in Parliament out of 51 – and Fiji would have had a new Government.

I am not criticising small parties. People must have the right to form parties and put up their viewpoints and ask for people’s votes. I am just pointing out the hard electoral maths of the 2018 election.

We did not make these rules. But we have to know how to make them work for us.

Proportional representation voting systems exist all around the world. These systems mean that it is often hard for one political party to win a majority of votes. So parties are forced to join coalitions and work together.

This is how the system could – and should – work in Fiji.

How do we work smart?

There are six registered political parties lined up against FijiFirst party. Not all of them think the same.

In NFP we have strong views about economic reforms, education, health, local government, the sugar industry, the environment and engagement with the iTaukei and Rotuman communities on issues which are dear to them. Not every other party will agree with us on those policies.

Democracy requires that each party should go out to the people and fight for their votes. They should put their ideas and candidates in front of the people and say “if you believe in us, vote for us”.

Then, after the people have voted for whom they want, the parties who are elected to Parliament can come together to form coalitions which reflect the people’s wishes (and sometimes having to compromise on policies). That is real “people power” in action.

NFP is getting ready for the next election right now. Like every party, we want to be the biggest party in Parliament next time. So we will fight for every vote. But we know other opposition parties will also win seats in Parliament.

Under the Constitution, whoever has the most seats in Parliament is asked to form the Government. If no one has a majority, then the biggest party must work with smaller ones to form a coalition.

We are confident that the FijiFirst party will not win. And we are also listening to the people who want the opposition parties to get together.

The rules make it hard for us to merge. But we can still win together if we plan carefully before the election and work together afterwards.

The small parties have the biggest problem. Should they ask the people for their votes if they will not get to 5 per cent of the total votes? Because if this happens, thousands of anti-government votes could be wasted.

We sympathise with their dilemma – but unfortunately we don’t make the rules. We must work with what we have got. We believe it is our responsibility to rid Fiji of 15 years of misrule.

Working democratically and working smart means giving the people political choices through the major parties – and working together once the people have voted.