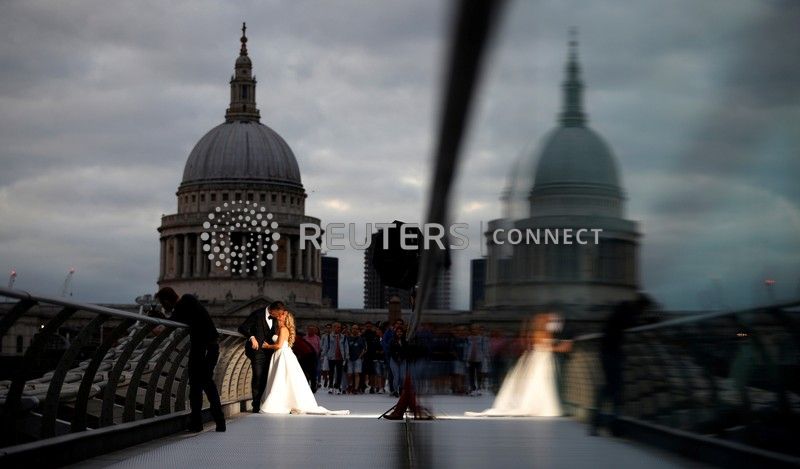 A bride and groom pose for photographs on the Millennium Bridge with St Paul's Cathedral as a backdrop in London, Britain, August 22, 2018. REUTERS/Phil Noble TPX IMAGES OF THE DAY - RC14B26085F0

LONDON (Thomson Reuters Foundation) – British couples will be able to include their mothers’ names on their marriage certificate under a change in law hailed as a step forward for women’s rights on Wednesday.

Church of England leaders also praised the change, which passed into law this week, saying the previous system demeaned women and was out of step with modern times.

Previously, marriage certificates in England and Wales only included space for fathers’ names.

“We have finally achieved tangible progress towards the equal treatment of both parents,” said the Bishop of St Albans in a joint statement with Caroline Spelman, a lawmaker who works closely with the church and had campaigned for the change.

“Only fathers’ names were formerly recorded when marriages were registered, a custom unchanged since 1837,” she said.

“This clear and historic injustice reflected the time when children and wives were considered property of men and it is high time for this to be corrected.”

The system had long attracted protest from women’s rights activists, who said it symbolised a system that treated women as second class citizens.

“A country’s laws set the tone for how it treats its people,” said Niki Kandirikirira, the head of programmes at women’s rights group Equality Now.

“Something like this may seem like a small legal inequality but in reality it is part of a much wider pattern of inequality rooted in patriarchy and discrimination against women.”

The new act will also open up civil partnerships – previously only open to same-sex couples – to heterosexual couples by the end of the year.

That move followed pressure from some women who felt that traditional marriage had patriarchal connotations.

“We have achieved equality for all couples in relationships,” said Martin Loat, the chairman of Equal Civil Partnerships, in a statement.