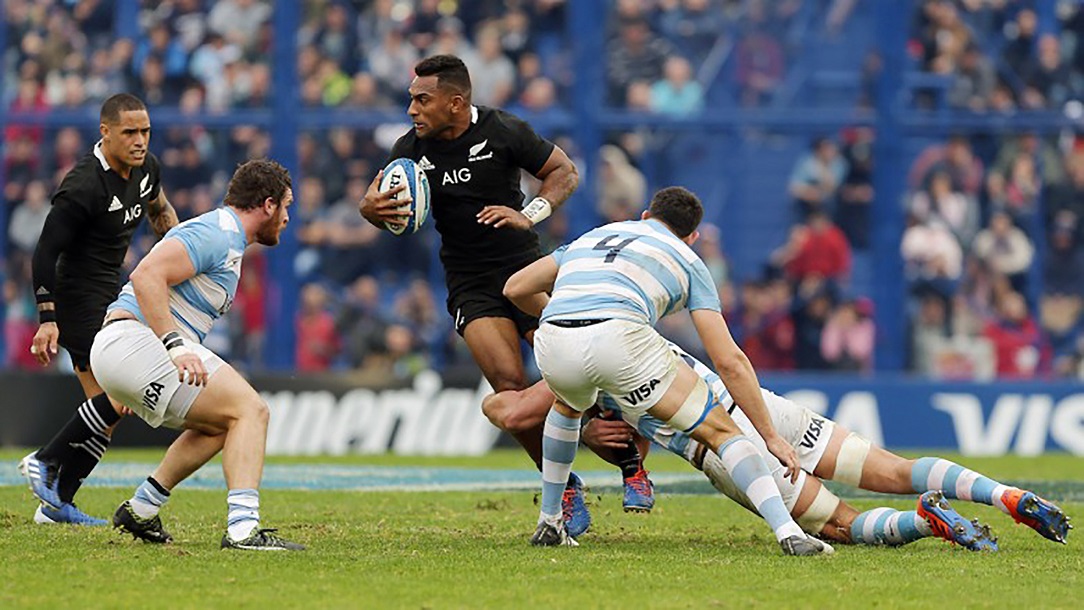 All Black Sevu Reece on the attack against Argentina . Picture: PHOTOSPORT/TVNZ

ALL Blacks winger Sevu Reece labelled his Test debut as something “special” and dedicated it to his family in Fiji.

“A really special moment,” Reece said in an interview with Sky Sports.

“Not just for me, but for my family back in Fiji.

“I’m sure that everyone will be awake now at 6am.”

Although it was a quiet day for Reece on attack, the openside winger proved vital in defence.

“I’ve learned a lot this week here in Argentina.”

With one Test cap in the bag, Reece will now be in contention to add to his tally with the All Blacks returning home to face South Africa in Wellington this week.

New Zealand held on by the skin of their teeth for a 20-16 victory over Argentina in a tense Rugby Championship clash at Velez Sarsfield yesterday.

An All Blacks side lacking several top players led 20-9 at halftime but failed to score in the second half and were indebted to their defence for denying the Pumas a first-ever victory over New Zealand in 29 tests.

Fullback Emiliano Boffelli scored Argentina’s only try two minutes into the second half, catching and grounding a fine kick into the All Blacks’ in-goal area by flyhalf Nicolas Sanchez.

The Pumas then dominated possession and territory but failed to score again, having another try ruled out by the TMO 13 minutes from the end after wing Ramiro Moyano put a foot in touch.

Argentina made a good start, taking a six-point lead with penalties from Sanchez and Boffelli in the opening six minutes and might have added a try but for some good defending by title holders New Zealand. The

All Blacks then got a grip on the match and forced the Pumas into mistakes that resulted in penalties which they converted into points with centre Ngani Laumape charging over from scrumhalf Aaron Smith’s tap penalty after 18 minutes. Another Sanchez penalty restored Argentina’s lead but two penalties from Beauden Barrett had New Zealand back in front.

Lock Brodie Retallick then scored another ultimately decisive try just before the interval when he intercepted a Sanchez pass.

Argentina came out in the second half determined to make amends and could have cut the deficit to one point but for a rare penalty miss by Sanchez soon after their try.