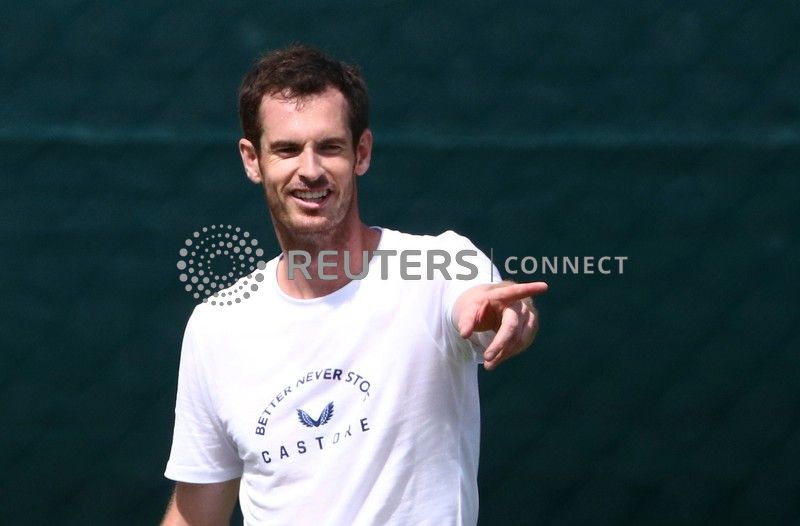 LONDON (Reuters) – Andy Murray left a string of broken hearts with his decision to hook up with Serena Williams in the mixed doubles at Wimbledon and Victoria Azarenka had a stark message for anyone harbouring hopes of breaking up tennis’ power-couple – “good luck!”

Never before has there been so much buzz about a mixed doubles union – especially since the competition is usually all but ignored until the final weekend of a slam.

But with Williams and Murray holding 26 singles majors between them — including nine at Wimbledon — they are the duo every pair in the mixed doubles field wanted to avoid.

On Wednesday, Alex Guarachi and Andreas Mies were the unlucky ones who drew the short straw for the first round match.

Undoubtedly the Chilean-German duo will have never encountered anything like the attention the clash will receive with the match expected to be played later this week on Centre Court or Court One.

Asked what she thought of the Williams-Murray partnership, Azarenka said: “Good luck to everybody else. It’s going to be a tough, tough, tough one to beat.

“They both take it seriously. But I feel like it’s going to be just a pleasure for people to watch. It’s going to be historic. So I’ll be definitely watching.”

Millions more will tune in too but for some, it will be with a heavy heart that they were not the chosen one.

The coming together of the partnership dubbed in some quarters as “SerAndy” or “AndEna” left Murray’s 84-year-old grandmother Shirley Erskine “disappointed” while Azarenka was even more blunt by declaring she was “pissed”.

Last week Erskine had posed with a tennis racket as she offered her services to her grandson by saying: “Right Andy, if you’re still looking for a mixed doubles partner you’ve got absolutely the right one here, no problem.”

With that dream dashed, Murray’s mother Judy provided an update on Twitter: “Dear Andy, Your gran is so disappointed. But she concedes that Serena may just have the edge on her. Love from Mum x.”

Azarenka had also thought she was in with a shout of partnering Murray since she had gone all the way to the final with his elder brother Jamie last year.

“I was hoping with the success I had with Jamie last year I was going to be honoured to get asked, but whatever …,” she said with a smile.

Williams, 37, is bidding for an eighth singles title at the All England Club while the 32-year-old Murray is concentrating on doubles as he continues his comeback from hip surgery.

It is Murray’s first foray into mixed doubles at the grasscourt major, while Williams, who owns 16 Grand Slam doubles trophies, captured the 1998 mixed title with Max Mirnyi.

However, Williams has not played mixed doubles at a slam since partnering fellow American Bob Bryan at the 2012 French Open.