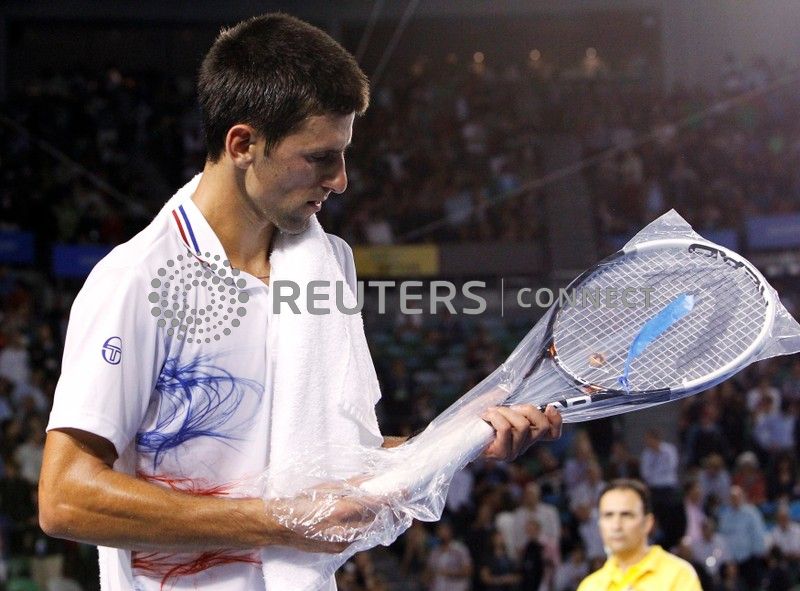 FILE PHOTO: Novak Djokovic of Serbia takes out a new racquet at the start of the third set against David Ferrer of Spain during their men's singles quarter-final match at the Australian Open tennis tournament in Melbourne January 25, 2012. REUTERS/Vivek Prakash

LONDON (Reuters) – Many of the traditions of the Wimbledon tennis championships have endured for decades but this year one familiar courtside sight will be missing.

No longer will players be taking new racquets out of polythene wrapping bags when they break a string or want a replacement.

The All-England club has removed plastic bags from the player racket-stringing operation as part of a raft of environmentally-friendly moves, which means there will be 4,500 fewer such bags used at this year’s tournament, which starts on Monday.

“We believe that Wimbledon, along with other major events, has a vital role to play in helping to protect the environment, today and for the future,” said club chief executive Richard Lewis in a statement.

Last year’s Wimbledon men singles finalist, Kevin Anderson, who is also the vice-president of the Association of Tennis Professionals Player Council, has called for all major tournaments to scrap the packaging.

Last year, no waste produced from the championships went to landfill, the club said, and plastic straws were also banned.

Wimbledon is not the only London sports event becoming more environmentally friendly – the Oval cricket ground has reported that it has reached 90% of its target to become completely single-use plastic free.