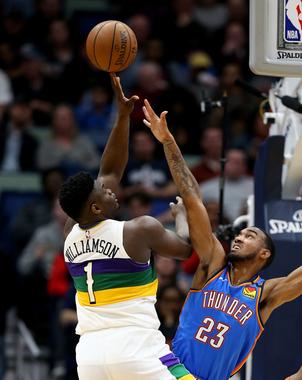 Danilo Gallinari scored 11 of his 29 points in the fourth quarter as the visiting Oklahoma City Thunder held off the New Orleans Pelicans 123-118 on Thursday night.

The Thunder completed a four-game sweep of the season series in the last game for both teams before the All-Star break.

Dennis Schroder had seven of his 22 points in the fourth quarter, Shai Gilgeous-Alexander finished with 17 points, Chris Paul had 14 points and 12 assists, Steven Adams had 11 points and 11 rebounds and Mike Muscala scored 10.

Rookie Zion Williamson led the Pelicans with a season-high 32 points, surpassing the 31 he had two nights earlier against the Portland Trail Blazers. JJ Redick scored 24, Lonzo Ball had 16 points and Jrue Holiday totaled 14 points and 11 assists. New Orleans played its third straight game without All-Star forward Brandon Ingram, who has a sprained ankle.

Paul made a 3-pointer to put Oklahoma City back on top, and Muscala had eight points during a 14-0 run that gave the Thunder a 94-81 lead.