Will she, won’t she? Argentine ex-president teases election run with book launch 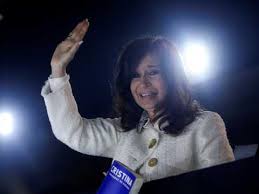 Argentina's former President Cristina Fernandez de Kirchner waves to supporters after the presentation of her book "Sinceramente", at the Buenos Aires book fair, in Buenos Aires, Argentina May 9, 2019. REUTERS/Agustin Marcarian

Underscoring how the divisive, left-leaning populist can command an audience, supporters packed out an auditorium with thousands more braving driving rains outside to watch giant screens as she discussed her memoirs at a book fair event.

Fernandez, a firebrand politician who led Argentina between 2007 and 2015, is widely expected to challenge center-right President Mauricio Macri and has been rising in the polls as an economic crisis hammers the government.

The crowds outside, more akin to a political rally than book fair, sporadically broke into chants of “Cristina for President” and “we will come back”. The former leader, however, kept quiet on plans to run, despite anticipation she may launch her bid.

Argentina is struggling with stubborn inflation and a tumbling peso currency, troubles that have driven down Macri’s popularity in opinion polls and fueled speculation that Fernandez could make a successful comeback.

The question mark over Fernandez’s plans to run have roiled local markets. International investors are wary of the populist ex-president, who during her tenure raised taxes on exports, increased subsidies and brought in currency controls.

“The expectation is that Cristina will come back because things are very bad,” Antonio, 71, a retired industrial worker told Reuters at the event.

The book, a 600-page collection of personal stories that has been selling fast in the Latin American country, lashes out the at the self-described “militant Peronist” leader’s political rivals and refers to arch nemesis Macri as “chaos.”

In her over 30-minute talk at the International Book Fair in Buenos Aires, she called for a “social contract” to overcome the country’s problems but kept a measured tone and mainly focused on the book, titled “Sincerely”.

Fernandez has not yet officially announced plans to run in October, but she has over a month until a June 22 deadline requiring her to formally declare.

Reuters reported in February that Fernandez intended to run against Macri, though she has faced pushback, including from within the broad Peronist opposition, where she is a major force.

Fernandez’s appearance comes weeks before she is scheduled to stand trial on graft charges, including allegations that she led a corruption ring involving politicians and business executives during her time in office. As a sitting senator, however, Fernandez has immunity from arrest.

Fernandez has repeatedly denied the charges.