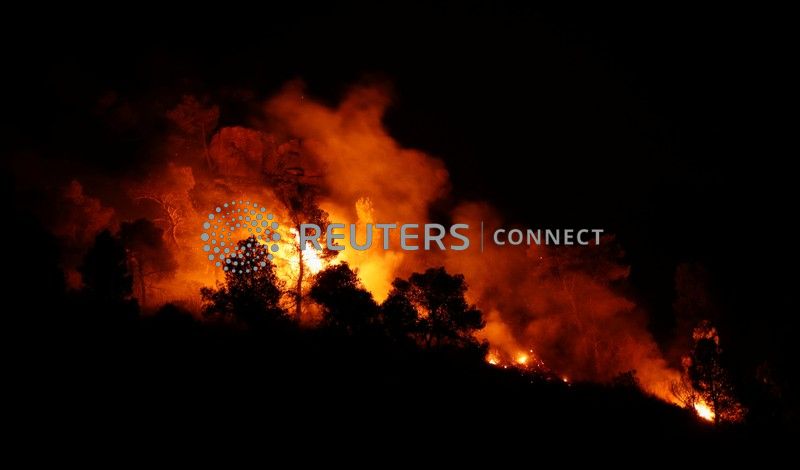 TARRAGONA, Spain (Reuters) – Wildfires raged on Thursday across nearly 10,000 acres (4,000 hectares) in the northeastern Spanish region of Catalonia and fire fighters said the area affected could increase significantly as a powerful heatwave grips the entire country.

Temperatures in some parts of Spain are expected to soar to more than 43 degrees Celsius (109 Fahrenheit) on Thursday and Friday. Some other western European countries including France and Germany are also wilting under the heatwave.

The wildfires in Catalonia are among the worst it has seen in 20 years, the regional government said, adding that around 30 people had been evacuated from farmhouses in the affected area.

Helicopters dumped water on the fires blazing across hills some 80 km (50 miles) inland from the coastal town of Tarragona. There were no reports of any casualties.

“From the initial moments, the fire spread rapidly in a northeasterly direction, driven by the wind,” it said in a statement.

“Last night the fire had a 128-kilometer (80-mile), 14-kilometer-long (9-mile) perimeter, and had affected some 3,600 hectares (8,896 acres) across several municipalities,” the regional government said in a statement.

Firefighters said the affected area could increase to 50,000 acres (20,000 hectares) given the intense heat.