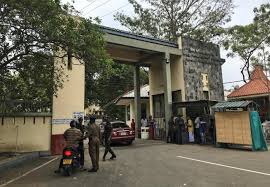 AMPARA, Sri Lanka (Reuters) – The wife and daughter of the suspected mastermind of suicide bombings that killed 253 in Sri Lanka on Easter Sunday escaped with minor injuries from an explosion at a safe house where they had been holed up, hospital staff and police said on Monday.

Mohamed Zahran Hashim was the ringleader of a group who blew themselves up in churches and hotels, an attack that sent shockwaves across the Indian Ocean island. The Islamic State militant group claimed responsibility.

His father and two of his brothers were killed when security forces stormed their safe house on the east coast of the country on Friday night, police and a relative said.

The Sri Lankan military said at least 15 people were killed during a gun battle there, and Islamic State said on Sunday that three of its members detonated explosive vests at the end of the clash.

The only two survivors of the blasts were Zahran’s wife, Abdul Cader Fathima Sadia, and his four-year-old daughter, Mohamed Zahran Rusaina, who were pulled from the wreckage on Saturday morning.

Sadia is a key accused in the Easter Sunday bombings, according to three police officers in the eastern district of Ampara, who declined to be identified as they are not authorized to speak to the media.

At Ampara General Hospital, where the pair are being treated, there was a heavy police and military presence on Monday.

They both suffered 5-10 percent burns along with minor lacerations from shrapnel, said Upul Wijenayake, the hospital’s general manager.

“They are clinically stable though both of them have burn injuries,” he told Reuters. “Both of them are improving.”

Despite Sadia’s suspected role in the attacks, she is not under arrest, according to Wijenayake and police officers who spoke to Reuters.

“No one is arrested in the clinical process,” said Wijenayake. “It is a matter of ethics.”

Hospital staff denied a request by Reuters to visit Sadia to seek comment on her alleged role in the attacks.

Security was very tight at the hospital around arguably the country’s most high-profile patients.

Hospital staff were trying to work out how the pair managed to survive the blast, which police believe killed many of Zahran’s relatives.

A series of explosions blew off the house’s roof and left a crater in the concrete floor. But the structure’s kitchen and bathroom were relatively unscathed, a Reuters team saw during a visit to the property on Sunday.

Sri Lankan security officials have warned that militants, possibly dressed in uniform, were planning more attacks. Security has been ramped up across the country, and scores of suspects have been arrested since the April 21 blasts.