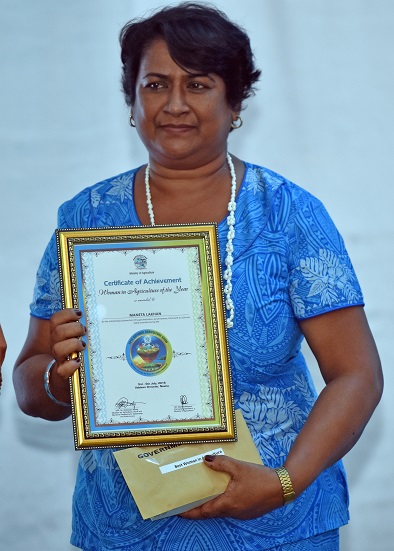 The 53-year-old widow Maneta Lakhan took over her husband's farm and operated it on her own and last week on Friday,the Ministry of Agriculture recognised Ms Lakhan as the best woman in Agriculture. Picture: RAMA

LOSING a spouse can be devastating, but for Maneta Lakhan, her husband’s death did not deter her from continuing his hard work and passion.

Ms Lakhan lost her husband after a short illness five years ago.

Following this, the 53-year-old took over her husband’s farm at Waidalice in Tailevu.

Last Friday, the Ministry of Agriculture recognised the widow as the Best Woman in Agriculture during the 2019 Agriculture Show Farmers Awards.

“Hard work and sacrifice is the key,” she said.

“Nothing is impossible, I was managing our family farm and was also looking after my mother-in-law and my two teenage daughters who were in school during that time.

“It was never easy, but I was motivated by my husband’s hard work and also because I had to look after my family.”

Ms Lakhan has a total stock of 74 heads of which 20 are milking cows, producing more than 100 litres of milk on a daily basis.

She plans to increase her farm production and also expand it.

A total of 19 farmers from around the country were recognised by the Agriculture Ministry during last week’s farmer’s awards night.

Minister for Agriculture Dr Mahendra Reddy encouraged farmers to be persistent with the work they did because it also contributed to the well-being of the Fijian economy.