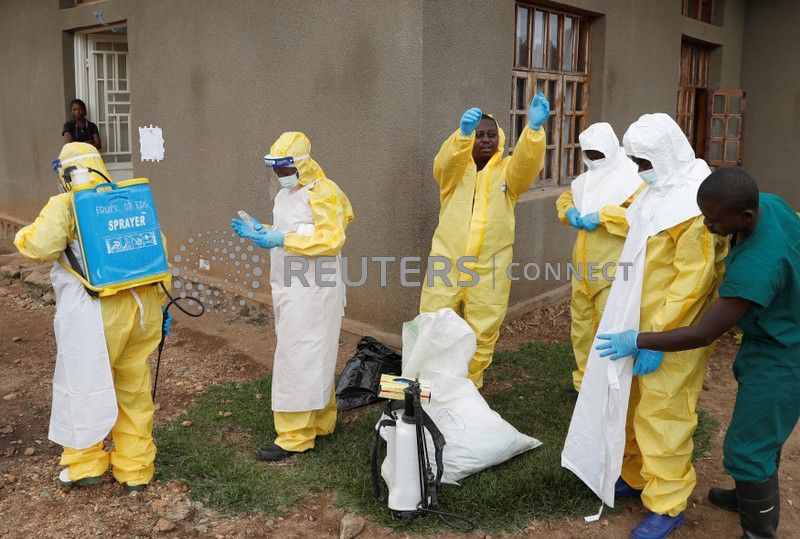 FILE PHOTO: Healthcare workers adjust gear before they enter a room where a baby is suspected of having died from Ebola, in Beni, North Kivu Province of Democratic Republic of Congo, December 15, 2018. REUTERS/Goran Tomasevic

GENEVA (Reuters) – World Health Organization experts recommended on Tuesday a dramatic expansion of vaccination against Ebola in Congo after a surge in cases showed that the strategy of vaccinating those known to be exposed to the disease was no longer sufficient.

Health workers fighting against the second worst Ebola epidemic in history are now implementing a “ring” strategy, vaccinating anyone directly exposed to known cases of Ebola, and a second ring of those exposed to people in the first ring.

But after four weeks of sharp increases in cases, the World Health Organization’s strategic advisory group (SAGE) of outside experts said the vaccine programme was no longer big enough.

A large share of new cases are now occurring in people who were not known contacts of earlier patients, and the disease is spreading to areas where it is impossible to trace contacts and swiftly vaccinate them.

It recommended a number of changes, including expanding vaccination to a third ring of people exposed to those in the second ring, and “geographic” vaccinations that would target everyone at a location without trying to track their exposure.

To prevent supplies of the vaccine, made by Merck, from running out in a much larger vaccination programme, the WHO experts recommended using smaller doses. A second experimental vaccine made by Johnson & Johnson should also be rolled out.

“We know that vaccination is saving lives in this outbreak,” WHO Director-General Tedros Adhanom Ghebreyesus said in a statement. “These recommendations account for ongoing insecurity and incorporate feedback from experts and from the affected communities that will help us continue to adapt the response.”

Jeremy Farrar, an infectious disease specialist and director of the Wellcome Trust global health charity, welcomed the recommendations and described the Congo outbreak as “in a truly frightening phase”.

“If there is any hope of bringing it under control there has to be a significant shift in the response,” he said in a comment emailed to Reuters. “Without support for this new approach this epidemic could reach the scale of the terrible events in West Africa in 2013-2016.”

Farrar was referring to the largest Ebola outbreak in history, which infected 28,000 people in a vast epidemic that spread through Guinea, Liberia and Sierra Leone between 2013 and 2016. More than 11,300 people died.

In the current Congo outbreak, the WHO says more than 111,000 people have been vaccinated since August. So far 1,045 of the 1,572 people with confirmed or probable Ebola have died in the outbreak, which has hit areas long prone to unrest.

SAGE said the number of cases had risen rapidly in the past four weeks because security incidents had dramatically affected the tracing and monitoring of people who may have come into contact with Ebola.

The Merck vaccine could run short if the outbreak continues, and doses should be halved to 0.5 ml for the primary and secondary rings, SAGE said, while they also proposed vaccination of a tertiary ring of contacts, who would receive 0.2 ml.