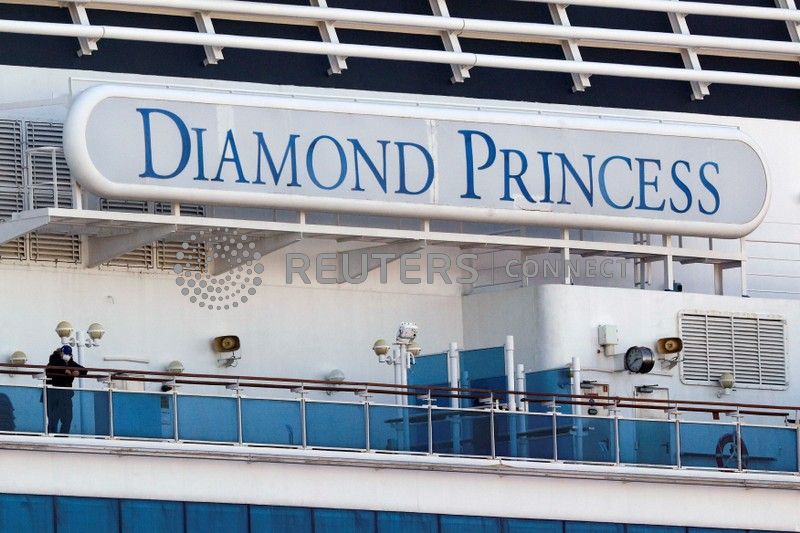 FILE PHOTO: A passenger wearing a mask stands on the deck of the cruise ship Diamond Princess, as the vessel's passengers continue to be tested for coronavirus, at Daikoku Pier Cruise Terminal in Yokohama, south of Tokyo, Japan February 13, 2020. REUTERS/Kim Kyung-Hoon/File Photo

The World Health Organization (WHO) has reported that as of yesterday (February 18, 2020), China now has recorded 72,528 coronavirus cases, including 1870 deaths.

In the past 24 hours, WHO director general Dr Tedros Adhanom said China had reported 1891 new cases, including both clinically and lab-confirmed cases.

He said outside China, there were now 804 cases in 25 countries, with three deaths.

He added that also in the past 24 hours, there had been 110 new cases outside China, including 99 on the Diamond Princess cruise ship.

“We have now had cases of COVID-19 outside China for more than a month. We are supporting national authorities in every country that has cases to track the virus and understand how people were infected,” Dr Adhanom said at a press conference held in Geneva yesterday.

“So far, there are 92 cases in 12 countries outside China of human-to-human transmission.

“At the moment, we don’t have enough data on cases outside China to make a meaningful comparison on the severity of disease or the case fatality rate.

“We’re following up with countries to get more information about what happens about each case and the outcome.

“However, we have not yet seen the sustained local transmission, except in specific circumstances like the Diamond Princess cruise ship.”

Dr Adhanom said many countries were taking steps to prepare themselves and with WHO support.

He said they had shipped supplies of personal protective equipment to 21 countries, and will ship to another 106 countries in the coming weeks.

By the end of this week, he said 40 countries in Africa and 29 in the Americas were due to have the ability to detect COVID-19.

“Many of these countries have been sending samples to other countries for testing, waiting several days for results. Now they can do it themselves, within 24 to 48 hours.

“We still have a chance of preventing a broader global crisis.

“WHO will continue working night and day with all countries to prepare them.”

Millions of women feared at risk of backstreet abortions during pandemic