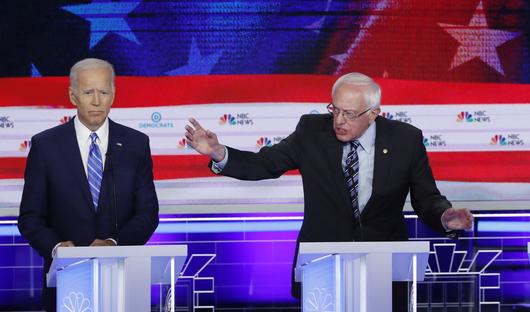 MANCHESTER, N.H. (Reuters) – A parade of 19 presidential hopefuls courted New Hampshire Democratic activists at a day-long convention on Saturday, touting their ability to unite the party and offering their visions for how to beat U.S. President Donald Trump in 2020.

In a series of 10-minute speeches, the contenders accused Trump of sowing hate and threatening democracy, calling the 2020 election a referendum on what kind of country the United States would be.

“This president has unleashed the deepest, darkest forces in this nation,” Democratic front-runner Joe Biden told the convention. “We cannot and I will not let this man be re-elected president of the United States of America.”

New Hampshire holds a pivotal early nominating contest in the Democratic race to pick a challenger to Trump, and the convention offered a chance for thousands of the state’s party activists to get a sense of the contenders.

It also offered U.S. Senator Elizabeth Warren of Massachusetts a chance to show her growing strength in the state. Warren received the loudest reception of the convention, pausing frequently for her chanting, cheering supporters.

“This is how we build a movement,” Warren said.

Opinion polls show former vice president Biden, who got a polite but restrained reception, holds a narrow lead in the state over Warren and U.S. Senator Bernie Sanders of Vermont, who won the state’s primary with 60% of the vote during his failed 2016 White House bid and also received a loud reception on Saturday.

But party leaders and the candidates said there was plenty of potential for changes at the top or a late charge by a lower-tier candidate, as many Democrats are still evaluating their options in the crowded field.

Several candidates, including former U.S. Housing Secretary Julian Castro, and Mayor Pete Buttigieg of South Bend, Indiana, said there was a thirst for some new faces.

“We need a new generation of leadership,” Castro told reporters, saying he could restore the coalition of young, minority and infrequent voters who elected Barack Obama to the White House twice.