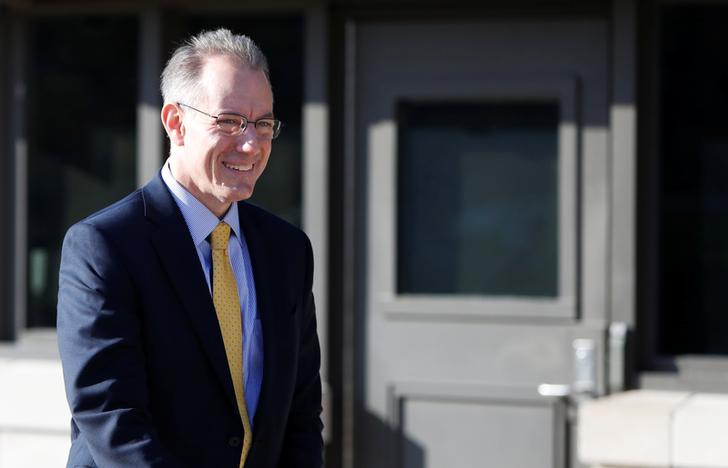 Mark Sandy, official of the Office of Management and Budget, arrives for a closed-door deposition as part of the House of Representatives impeachment inquiry into U.S. President Trump on Capitol Hill in Washington, U.S., November 16, 2019. REUTERS/Yara Nardi

WASHINGTON (Reuters) – A White House budget official testified on Saturday about the holdup of military aid to Ukraine in a closed door session of the U.S. House of Representatives impeachment inquiry of President Donald Trump, with public hearings set to resume next week.

Mark Sandy, a career official of the Office of Management and Budget, is the first person from OMB to testify before the inquiry after three political appointees defied congressional subpoenas to appear.

Sandy complied with a subpoena issued to compel his testimony, an official working on the impeachment inquiry said.

Trump’s pressure on Ukraine is at the heart of the Democratic-led inquiry into whether the Republican president misused U.S. foreign policy to undermine former Vice President Joe Biden, one of his potential opponents in the 2020 election.

In a disclosure that drew the most attention in the first public hearing last week, acting ambassador to Ukraine William Taylor pointed to Trump’s keen interest in getting the eastern European ally to investigate Biden, a former vice president, and reiterated his understanding that $391 million in U.S. security aid was withheld from Kiev unless it cooperated.

Morrison, who was on the July 25 call between Trump and Ukrainian President Volodmyr Zelensky, said he had reviewed Taylor’s testimony and did not dispute it on any significant points.

Williams, the Pence aide, testified that Trump’s insistence that Ukraine carry out politically sensitive investigations “struck me as unusual and inappropriate.” Williams testified that her notes from the July 25 call, which she listened to, included a mention of Burisma by Zelensky, the firm that had hired Biden’s son Hunter Biden as a director.