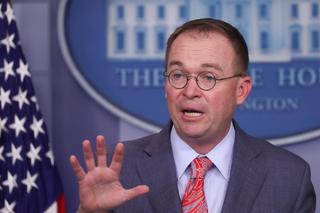 White House acting Chief of Staff Mick Mulvaney told reporters on Thursday that Trump’s decision to withhold $391 million in aid to Ukraine was linked to his desire for an investigation by Kiev into a debunked theory that a Democratic National Committee (DNC) computer server was held in Ukraine.

After weeks in which the president argued that he had done nothing wrong, Mulvaney’s comments, which he later sought to walk back, seemed to undermine the core arguments that Trump and his advisers have made against the effort to oust him from office.

“Unless your ultimate goal is to get to the impeachment vote sooner rather than later, I don’t see how that helps,” said one former administration official with ties to the White House.

“I don’t think it’s damning in and of itself, but it’s another piece of the puzzle that the Democrats are building and another incident that they can point to of using American foreign policy for private political gain,” he said.

One of Trump’s fellow Republicans, U.S. Senator Lisa Murkowski, was quoted in media reports as saying: “You don’t hold up foreign aid that we had previously appropriated for a political initiative. Period.”

Democrats in the House of Representatives are holding hearings to investigate whether Trump improperly pressured Ukraine to investigate a political rival, former Vice President Joe Biden, and his son Hunter, who sat on the board of a Ukrainian energy company.

The House could vote on impeachment later this year, which would trigger a trial in the Republican-controlled Senate where a conviction and ouster seem unlikely.

The confirmation of a quid pro quo – or favor for a favor – would bolster Democrats’ arguments that Trump misused his office.

In a written statement, Mulvaney later accused the media of misconstruing his comments. But his remarks at the White House, made while the president was traveling in Texas, tied action on the DNC server to the decision about the aid.