Where Reverend Thomas Baker once walked 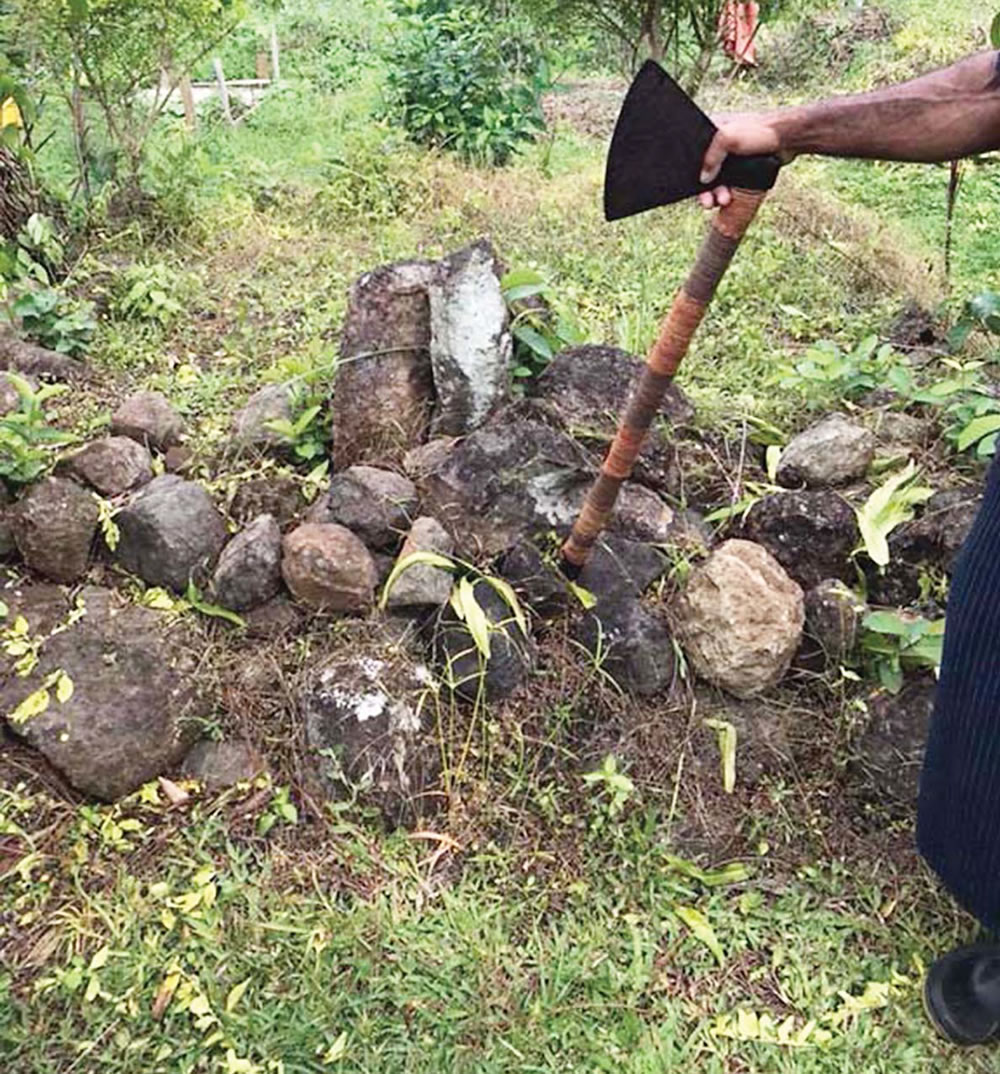 The place where Rev. Baker was killed and the axe used to kill him. Picture: FIJI MUSEUM/MELINIA NAWADRA-CINAVILAKEBA

Travelling to the interior of Viti Levu, where rugged mountains rule the rural skyline and life seems stress-free and laid-back, is never a straightforward adventure.

For generations, communities and families in these rustic parts of the country have been disadvantaged by their geography and, — their inability to access the markets and public services that we often take for granted in urban centres.

The heartland of Viti Levu, specifically the Navosa hinterlands and Highland districts of Ba, Ra, Naitasiri and Namosi, are no exception to the rule.

But it is also in these very demanding locations that indigenous Fijian culture and traditions, together with rituals and legends, have thrived and remained virtually intact to this day.

One of the many stories that have been told and retold within these montane localities is the death of Reverend Thomas Baker in the 19th century.

In a quest to trace the places the Methodist missionary once walked in a selfless quest to spread Christianity during a period in Fiji’s history marked by tribal warfare and cannibalism, a team from The Fiji Times, trekked through the interior of Navosa from the Ba/Ra border in 2010.

In fact, in the three years from 2008 to 2010, this newspaper had made several attempts to engage villagers who live here in order to document their rich history and unique legends.

According to history, after arriving in Fiji in 1859 with his wife, Rev Baker was chosen as the “Missionary to the Interior” in 1865.

In this role, he was required to make long and gruelling journeys to the interior of Viti Levu, which at the time was unscathed by the white man’s influences, to spread the gospel of Jesus Christ.

Not all Fijians and villagers were responsive to the early teachings of Christianity and its new God who would later displace its kalou vu and ancestral deities.

But the British Consul, Jones, passed through Nabutautau, a hilly community in the upper reaches of the Sigatoka River.

He was cordially received by villagers because in 1865, the colony of settlers, mostly British, had not posed any threat to the autonomy of the district of Navatusila.

In fact, their chief, Ratu Katakataisomo, accompanied Jones on a trip across the hills to Viti Levu’’s northern coast.

As they approached the coast, the party came across several refugees who were fleeing the invading warriors from Bau.

Katakataisomo left Jones immediately and returned to Nabutautau to prepare his people against any potential Bauan invasion.

From the point of view of communities in the interior of Viti Levu, the coastal chiefs were seen as weak, traitors because of their betrayal of the religion of their ancestors and the old ways of life.

According to the Fiji Museum, online sources “conversion to Christianity became linked”, in the minds of the hill tribes, “with tributary subservience to Bau”.

As such as the Mr Baker was quickly warned against making a trip to the interior on July 13, 1867. He went against this advice.

In December 2010, a team from this newspaper took a ride from Suva to Vaileka in Ra, via Kings Rd. From Rakiraki town, it diverted to the village of Narara to have a chat with a gentleman named Kemueli Penisoni, who was then 61 years old.

Penisoni was an ardent wild pig hunter who had become paralysed. In his heyday, he combed the thick forest of the Nakauvadra Range many times.

On one occasion, sometime in the 1980s, he discovered a cave with mysterious writings inside its wall. There were many vain attempts by this newspaper to locate this cave.

The Fiji Times team left Rakiraki and went to Tavua, then Vatukoula, where they crossed the jungle in order to finally descend somewhere near the fountainhead of the Sigatoka River, within Navosa.

The team crossed many places, including Natoalevu where a wooden case was opened in ancient times to find out a gift that was received from Tonga.

When the case was opened, people found out that it was a huge chicken. They called the rooster Turukawa.

In Fijian mythology, the rooster was shot by the mystic twin brothers Cirinakaumoli and Nakausabaria. This caused a war in the otherwise peaceful Nakauvadra range, Fiji’s equivalence to Mt. Olympus in Greek mythology.

Our team descended from a place called Novinoji, below which was a cave in which the people of Savatu believe the legendary Lutunasobasoba died.

To rest for the night, the team slept at Naga before further descending downhill in the morning the very next day.

It is said that on July 20, 1867, Rev Baker arrived at the village of Nagagadelavatu with five of his close companions who were native Christian teachers.

As the custom dictated, the visitors presented a whales tooth to the chief of Nagagadelavatu, Ratu Nawawabalavu, however, they were not received with favour and were not given food to eat in the night.

The same day, unbeknown to the missionaries, another whale’s tooth was sent by a hostile chief from Naitasiri, calling for Mr Baker’s head and those of his companions.

“Contrary to the popular myth that Mr Baker was killed because of his disrespectful gesture of combing the chief’s hair, the more plausible explanation is that the interior chiefs viewed the advancement of white settlers and Christianity into their land as a threat to their authority,” the Fiji Museum noted.

On July 21, 1867, Mr Baker and five of his men were killed just outside the village. Their bodies were thrown down the valley, 500 feet below, to the Sigatoka River.

Today, Nagagadelavatu and Nabutautau are located in the hills towering over Fiji’s longest river.

In the olden days, they were perfect vantage points.

The turaga ni koro or village headman of Nagagadelavatu, Vilitati Rokovesa, told The Fiji Times in 2010 that he was a direct descendant of Ratu Filimoni Nawawabalavu.

Left: Joseva Rokomatu points to the Sigatoka River below and a mango forest signifying an old settlement. Picture: FILE After the bodies of Mr Baker and his companions were thrown from atop the hills down to the Sigatoka River area, Mr Baker’s body was then carried on his shoulders using a stick called ivua.

The Fiji Times team discovered, after interviewing villagers in the Navatusila area, that Mr Baker’s body was first taken to a place called Narawa.

It was then transferred to Dubue, where an earthen oven was dug and Rev, Baker was roasted in a lovo pit.

As The Fiji Times found out, the lovo and its burned stones remain today, marking one of the darkest parts of Fiji’s history.

Mr Baker was put in the lovo with his boots, parts of which can be found on display at the Fiji Museum.

“The earth oven that was built to cook the bodies are still visible today but has never been used since Mr Baker’s days. It is believed there were only two survivors, Aisea Nasekau and Josefa Nagata, who later reported the matter to authorities,” the Fiji Museum noted.

According to The Fiji Times expedition, Mr Baker’s body was lifted from the lovo to a stone today known as Vatuniveivotai. Here, his body was cut into pieces using bamboo blades and shared among the many villages within the area.

In 1876, Nabutautau was one of the villages that fronted a resistance against British colonial authorities following the cession of 1874.

Nabutautau warriors were also involved in the resistance in April 1876.

The village was defeated when a government force made up of 500 Fijian soldiers.

The army was led by Captain Knollys and Ratu Napolioni Vuki, the Bauan Roko Tui Ba.

They entered the area through Nabutautau.

The Fiji Museum said the soldiers found the village deserted. Most fled to the nearby Lobonakoro caves where they remained undetected for two weeks.

“They later surrendered on July 16. Government forces went into the caves and found large supplies of food, fresh water, more than 50 guns and plenty of ammunition.”

The captured rebels were sent to Ba where they served their prison terms and the rebellion from within the Navatusila district was quelled.

• History being the subject it is, a group’s version of events may not be the same as that held by another group.

When publishing one account, it is not our intention to cause division or to disrespect other oral traditions. Those with a different version can contact us so we can publish your account of history too — Editor.