Where are our horses 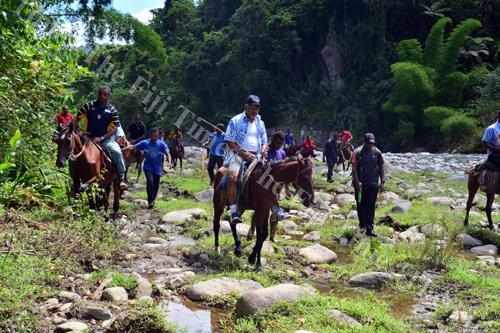 Prime Minister Voreqe Bainimarama on horseback during his tour of Noemalo District in the upper reaches of the Wainimala River two years ago. Picture: File

WHERE are the 100 horses you promised us?

This is the question villagers in the district of Noemalu in the upper reaches of Wainimala River are asking Prime Minister Voreqe Bainimarama.

Two years ago, when the PM visited Nakurukuruvakatini Primary School to present hostel supplies for the school, he was informed of the struggles the villagers faced when trying to reach the nearest road at Sawanikula Village.

Mr Bainimarama, after hearing their plight, promised he would provide them with 100 horses to ease the burden of transporting supplies to and from Sawanikula Village.

The promise was well-received by more than 600 villagers who make up the district. It appeared their decade-old transportation issues would soon be over.

But two years on, the villagers are still waiting and hoping the PM will live up to his promise.

Aminiasi Rakula is one of those who still clings to the hope of the horses being delivered. He lives in Nasauvere Village, a rural community accessible via a four-hour trek which involves crossing the Wainimala River 32 times.

Speaking on beahalf of villagers, the 69-year-old said: “We carried dalo and yaqona from the village to the school because the Prime Minister was coming to visit us.

“We were so happy when told us that he was going to give us 100 horses to help carry our supplies while we waited for a road to be built.

Questions sent to the office of the Prime Minister two months ago, last month and again this past week remained unanswered.

While the villagers in the upper reaches of the Wainimala River wait on the road and for their horses, sadly though they still have to continue with their daily routine by carrying their supplies through the treacherous trek in the highlands of Naitasiri crossing the Wainimala River that has claimed the lives of 10 villagers in the past seven years.

Meanwhile, the PM made the promise on January 21, 2016 during his visit to Nakurukuruvakatini Primary School. He was there to hand over school supplies.

The promise was made during the talanoa session and the story was published on February 6, 2016.