What’s in a name? Pacific scholars back Moana over Oceania 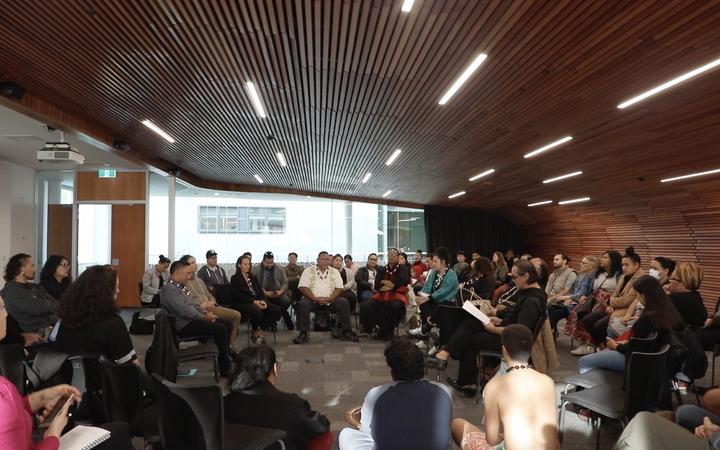 Scholars, artists and others at the Va Moana talanoa session at AUT this week. Picture: RNZ

Moana, they say, identifies all Pasifika peoples, their lands, their waters and their cultures.

The group gathered in Auckland this week for the panel discussion Vā Moana Talanoa – Salty Blood and Tears: Ocean Stories.

One of the speakers Tevita Ka’ili, a professor of anthropology at Brigham Young University (BYU) in Hawaii, said it was an opportune time to discuss a new name.

Prof Ka’ili, who is also dean of the Faculty of Culture, Language and Performing Arts at BYU, said it was important Pacific islanders agreed.

“Beautiful that we have this place for us to talanoa a name for Oceania or maybe the multiple names that we use to sort of identify ourselves but also express our deep history and culture as people from the moana nui,” he said.

“This is part of our history. Our history is communicated and expressed through symbols. And this is one of the symbols that we use to communicate that particular history.

Prof Ka’ili said he had taken a lot from the discussion, or talanoa, and would share it with his students.

“I teach cultural anthropology and we have a section about identity, section about the names of people from different parts of the of the moana nui.”

New Zealand artist Rosanna Raymond said it was important for Pasifika peoples to have knowledge of who they are.

“So you can take on the responsibility of challenging a very big Western framework that we are constantly inhabiting,” she said.

“So a lot of this talanoa needs to come – not just on the pages but in the way we talk to our children and the way that we express ourselves.”

A lot of work needed to be done to achieve this, Raymond said.

Vincente Diaz, of the University of Minnesota, agreed it was not going to be easy.

“The idea that we’re all from the same place – that’s also an idea that was forced upon us by outsiders,” he said.

“Just like the term Pacific, it’s a kind of misnomer that is also built on certain assumptions that are just way, way off.

“On the other hand, we have common histories. Not only from that history of colonialism but also there’s a lot of evidence that we have shared origins – our languages.”

The professor of American Indian and Indigenous Studies said he was also hopeful such talanoa sessions would help Pacific islanders take stock and work through their difficulties.

More dialogue would help them understand each other better, he said.

“The two big places where that’s been happening are our own art festivals – festivals of Pacific Arts,” he said.

“Over the past couple of decades, that’s been really key for people getting to know each other.

“But academia has actually been the other place that has been in some ways rightfully maligned and in other ways under-appreciated.”

Academia was still an imperfect forum but an appropriate one, Prof Diaz said.

“For me, my first boat out of my island was sports. But the canoe or the waka that has been the most productive, generative, stimulating has been academia.

“Two or three decades of trying to forge Pacific studies, some kind of studies that take stock of the whole region and its diversities and commonalities. There’s a lot of contradictions.

“And a forum like this is struggling to keep a pace with those contradictions.”

To help, more people from Micronesia and Melanesia were needed at these talanoa sessions, Prof Diaz said.

The talanoa also paid tribute to the late Pacific scholar, poet and activist Teresia Teaiwa, who died in 2017