Wet your whistle: a Croatian wine worth diving for 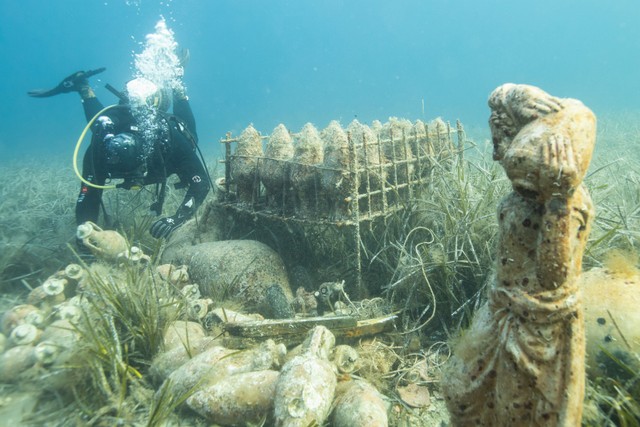 Ivo Segovic inspects wine in amphora at the bottom of the sea near Zuljana, Croatia, September 25, 2018. REUTERS/Antonio Bronic

DRACE, Croatia (Reuters) – An experiment by two Croatian bar owners who decided to store their wine beneath the waves of the Adriatic Sea is set to go interactive as they invite guests to dive for their drink.

Ivo Segovic, a wine producer on the Peljesac peninsula in southern Croatia, and his partner Edi Bajurin placed their first bottles of red wine 20 metres below the sea surface in 2009 to see what would happen.

From next year they plan to offer guests the chance to dive alongside winery staff to select a wine to accompany their meal.

“In the Bay of Mali Ston at that depth we have a constant temperature of 15 degrees Celsius. It’s an ideal environment for storing red wine,” Segovic told Reuters.

Problems arose, however, including sea water leaking into the bottles and the sun, despite the depth, reaching the bottles.

“It took three years until we found a solution using wax and an appropriate cork. What was still missing was darkness. Then the idea of putting bottles in amphoras came up. It worked,” said Segovic, referring to tall clay pots with handles like those used by the ancient Greeks and Romans.

The wine, which is named Mysterium and made from a local grape called Plavac Mali, is kept on the sea floor for around 700 days and aged a total of three years before it is sold.

“Because of the different way it’s aged, the taste of the wine from the sea, compared to one kept in a cellar, is a bit smoother and rounded,” said Darko Dabic, a sommelier from the nearby tourist destination of Dubrovnik.

“It has somewhat less alcohol and carries the aroma of cherries and plums,” Dabic said.

Segovic and Bajurin sell the wine at their bar in the hamlet of Drace on the northern side of the Peljesac peninsula alongside locally produced cheese and prosciutto.

“More than 90 percent of our guests are foreigners. Our wines are better known abroad than in Croatia,” said Segovic.