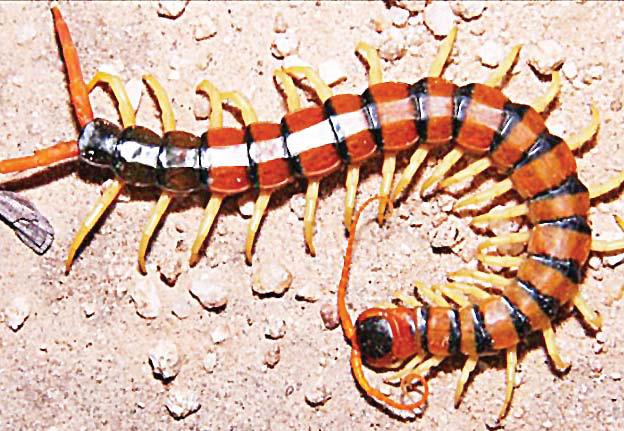 Perspiration isn’t the only thing that comes popping out in the humid tropical weather.

Just the other night I lay steaming under the ceiling fan in my room, trying to counter the humidity until the incipient storm broke and let loose a cooling downpour.

The distant rumble of thunder was suddenly drowned out by a close, piercing scream from a woman old enough to know better.

However, she is a woman who harbours a deep dread of toads in the toilet, cockroaches in the cupboards and centipedes anywhere in her vicinity.

This was the centipede scream and I reacted immediately.

As I tried to put my bare feet on the floor to flee, the screaming escalated and I understood I was in danger of actually stepping onto the large, deeply dreaded centipede.

I’ve been bitten in my own bed before by a centipede and once inadvertently wrapped myself in a sulu that contained a nest of centipede babies so I really don’t need any further warnings.

Their bite is nasty and potentially dangerous.

I have read, and believe, that a severe bite by a large centipede on a child or elderly person could cause a heart attack.

I have also read that this is extremely rare, but I would just hate to be the exception.

The centipede was now making for my cupboard or maybe my scarf basket while the screamer was dancing on the spot looking for something really, really heavy to hit it.

Don’t think this is overkill.

A reputable travel book instructs people who are set upon by centipedes to kill or capture them on sight….if you can.

Capture is trickiest, they move extremely fast and I don’t feel confident to trap them securely with the old glass and paper trick.

Most of them are far too big anyway.

With what I think was a great presence of mind I grabbed my handy bath towel and batted the centipede back into the centre of the floor, giving the great hunter a chance to weigh in with a sharp knife. Sharpish knife, I should say.

She’d grabbed the bread knife and a serrated blade is not the ideal centipede slicing implement. Nonetheless, the mat was soon dotted with pieces of potentially deadly insect and I was able to return gingerly to the bed for a wary night of listening for the ominous crackling sound made by centipedes on the prowl.

Centipedes shouldn’t be unnecessarily confused with millipedes, which are similarly large worm-looking things with a hard, segmented carapace and many legs, seen most often on trees and are harmless.

You can tell the difference by checking the number of legs on each body segment. But who is going to take the time to count whether some l8cm long potentially fatal creature has one or two legs per segment? Just so you know, it is the centipede with two per segment and usually has 15 to 180 pairs of legs.

It’s not just the centipedes that are invading our space with the torrid weather, but all sorts of other insect pests including the pervasive and destructive white-footed black ants.

When I think of the border control fuss about trying to bring the same sort of cheese from Australia as is allowed in from New Zealand, and the case of the $300 (fine) apple from an airline meal tray that a traveller had put in her bag to eat later and forgotten, I wonder how this ant scourge not only came into the country but is now apparently uncontrollable.

This is the same old, same old sort of question we were asking the previous government.

There are a few oldies that have been left to undermine the efforts of the new. However there is a new Minister for Agriculture, and although an ‘old’ MP, perhaps he will have something to say and do about ants.

There are some new faces that promise new attitudes and action.

Pity about the Speaker, who still appears to understand her job as stopping other people from speaking.

On a cheerier note, recent encounters have to some degree persuaded me that the public service is rebuilding public trust in the workings of government services and following the regulations and rule of law for fair treatment. Let’s hope so.