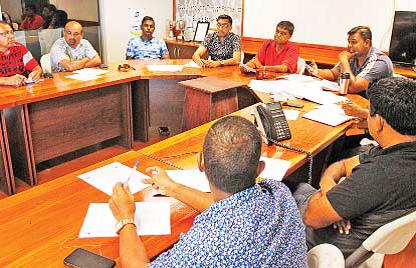 TWO matches will be played in the 2019 Vodafone Premier League this Sunday.

Defending champions Lautoka will host Tavua at Churchill Park while Ba will play Nasinu at Ratu Cakobau Park in Nausori.

Fiji Football Association national competitions manager Amitesh Pal said the official opening of the VPL would be held at Subrail Park in Labasa on January 26.

Pal said this will done during the Labasa versus Ba fixture.

“The full round of VPL matches will kick off next week,” he said.

“The senior division matches will start in March. Ba and Lautoka will be given a two-week break to prepare for their Oceania Football Confederation Champions League campaign.”

Lautoka is grouped with Central Sport (Tahiti), Henderson Eels (Solomon Islands) and Morobe Wawens (Papua New Guinea) for the OFC Champions League with all matches to be played at Churchill Park from February 10-17.

The Blues side lost to Team Wellington in the final last year. Ba is pooled with Erakor Golden Star (Vanuatu), Team Wellington and the runner-up of the qualifying tournament.

The Men in Black will travel to Vanuatu for its matches.

Meanwhile, Fiji FA conducted the trials to select its U23 team on the weekend. Seven overseas-based players were part of the trials.

The trials were held at the Fiji FA Academy ground in Ba and would continue until Wednesday.