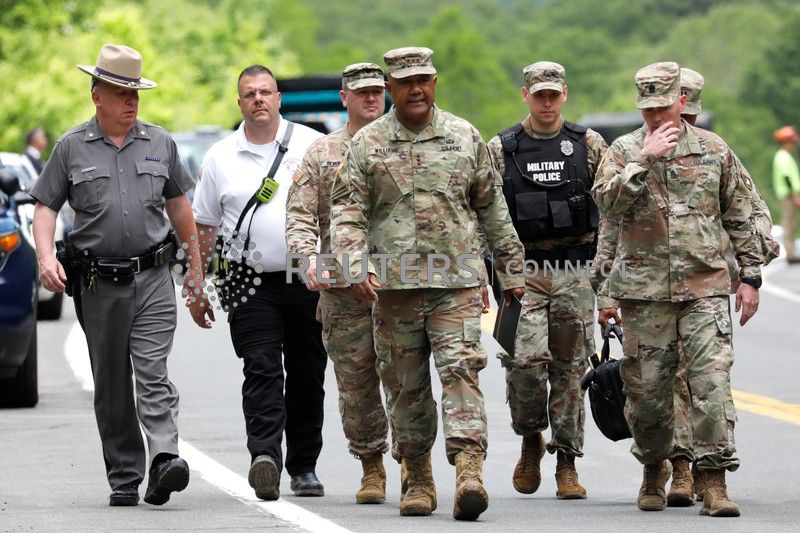 WEST POINT, N.Y. (Reuters) – One cadet from the U.S. Military Academy in West Point, New York, died and 22 cadets and soldiers were injured on Thursday when a tactical vehicle carrying them flipped over during a training mission, officials said.

The accident occurred near the Camp Natural Bridge, a summer training site for cadets, the academy said. Video from a news helicopter showed the vehicle overturned with its wheels up in a heavily wooded area.

Officials did not say what caused the accident.

“Today was a tragic day for the West Point community and our United States Army,” Lieutenant General Darryl Williams, the superintendent of the academy, located on the Hudson River about 50 miles north of New York City, said at a news conference.

The two U.S. Army soldiers were operating the vehicle, taking the West Point cadets through mountainous terrain on the way to a training area, Williams said.

The soldiers were in a cab and the cadets, who are seniors due to graduate in 2020, were in the bed of the vehicle under a soft canopy, said Lieutenant Colonel Christopher Ophardt, an Army spokesman.

Officials provided no details on the cadet who died.

“So sorry to hear about the terrible accident involving our GREAT West Point Cadets,” President Donald Trump said on Twitter. “We mourn the loss of life and pray for the injured. God Bless them ALL!”

New York Governor Andrew Cuomo issued a statement saying the accident “is made all the more heart-wrenching as we commemorate the 75th anniversary of D-Day today, a day where we remember those who gave their lives for our country.

Last year, 16 U.S. service members died in training accidents in non-hostile environments, while 15 died in hostile action, according to figures from the Pentagon.