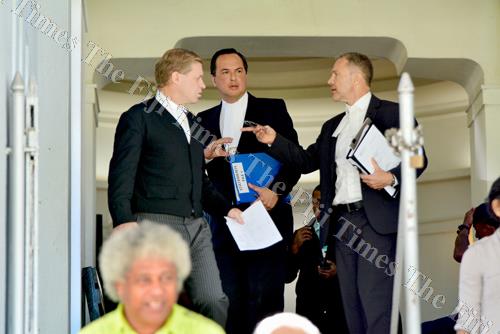 THE publisher of The Fiji Times has no involvement or input in the content of its publications, editor-in-chief Fred Wesley said. As the first witness for the defence, Wesley clarified this was to ensure editorial independence and no influence from outside parties.

He said the editors of the various newspapers (publications) reported to him as editor-in-chief and the only time he offered advice or direction to them was when an issue was referred to him.

Wesley said these editors were responsible enough to decide on what to bring to his attention if they were in doubt, what to drop and what to run. He said after the editors authorised their pages and sent them for production, he was usually briefed, but not on the letters.

Mr Waqabaca is charged with one count of submitting for publication an article written by him with a seditious intention, while Fiji Times Ltd is charged with one count of printing a seditious publication. Ravula and Mr Waqabaca yesterday opted to exercise their right to remain silent while the company confirmed they would be calling two witnesses.

These issues include letters that were related to defamation, issues of ethnicities or religion. Wesley said all editors had the powers to refer letters to lawyers if they were in doubt.

He said he never received nor did he read or had any knowledge about a letter that was allegedly published in the Nai Lalakai newspaper. Wesley said he also did not cause to publish the letter and he only came to know of the letter when he was arrested and charged by Police.

When being asked by Mr Waqabaca’s lawyer, Aman Ravindra-Singh during cross examination as to whether he had received any complaint against the alleged seditious article from the Permanent Secretary for iTaukei Affairs or its line minister, Wesley said he did not.

While responding to cross examination by Ravula’s lawyer, Devanesh Sharma, Wesley said Nai Lalakai was a separate publication that sub edited, copy edited and produced its own paper.

He said the three other publications, apart from The Fiji Times which came under him, were expected to send all letters of concern to them to the lawyers and that staff members of all publications have been made aware of these concerns through various trainings on the Media Act, the Constitution and other guidelines relevant to the journalism profession. He said the penalties in the Media Act were quite hefty which prompted the editors to enforce vigilance in their work.