We’re making progress,’ insists All Blacks coach as the defeats pile up 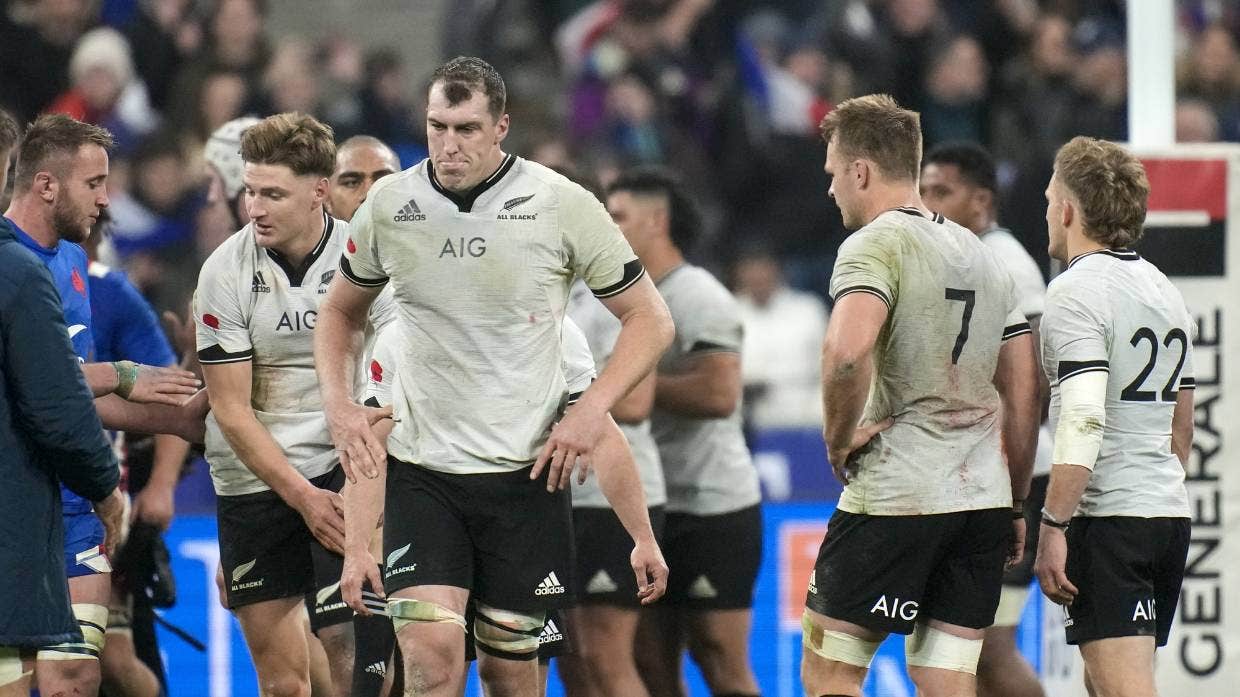 Brodie Retallick and the All Blacks reflect on back-to-back defeats to wrap up their test programme for 2021. CHRISTOPHE ENA/AP

It is not all doom and gloom for the All Blacks according to coach Ian Foster, though he might have a hard time persuading fans and critics alike to take such a generous view after they have just been walloped by the crème of the north in back-to-back tests.

Foster was forced to tip his hat to a magnificent French effort at Stade de France on Sunday morning (NZT) as Les Bleus thumped the All Blacks 40-25 in an entertaining and surging test that laid bare a dramatic shift in the balance of power in the world game. The New Zealanders had rallied well to close a 24-6 halftime deficit back to 27-25 midway through the final quarter, but were mowed down by their fast-finishing hosts over the run home.

Following last week’s equally convincing 29-20 defeat to Ireland in Dublin it sees the All Blacks finish their year with three losses from 15 internationals – their worst total of defeats since the four they dropped in 2009. It’s hard to shake the feeling that this is an All Blacks side in the proverbial freefall.

More disconcertingly, the French, like the Irish, exposed the All Blacks in a number of areas as they snapped a 14-test losing streak at the New Zealanders hands and completed a clean sweep of the southern hemisphere heavyweights by northern sides on the final weekend of the autumn series (South Africa were pipped by England at Twickenham and Australia by Wales in Cardiff).

Foster was asked afterwards if he felt his All Blacks remained on track, or had hit a major speed bump over the closing fortnight. “A bit of both,” was the gist of his reply after a test he felt had been an improvement on the week earlier.

“There’s no denying the last two weeks were tough for us,” he responded. “We came across two very good teams at the end of our season and they played well. I thought our response tonight was much stronger and we got ourselves back into some key moments that we’ve got to grow from. If we had been able to apply a bit of pressure at the end of that third quarter I felt we could have had a really different picture.

“If you look at our year, how do I feel about the progress? We’ve played more tests than we’ve ever played, and we’ve won 12 out of 15. I think South Africa lost five tests, Australia lost seven. I know we get judged harshly, but we’re making progress.

“We’ve got a good base of players now, we’re growing, but we’re also learning some tough lessons at the end of this long season. Big test matches come down to big moments and we’ve got to get our composure right and perhaps understand our game better. We know there’s still work to do, but we’ve got some good options now.”

Foster lamented another slow start where some key errors (a poor Barrett clearance and more dropped ball) and poor defence of the lineout drive had the French surging early.

“But I was proud of the way we came back in that third quarter. I felt we met and really challenged them, but we weren’t good enough to finish it off,” he said.

“Perhaps if we’d chased better when we chipped into their ingoal and they were smart enough to play and go all the way down the other end … and the yellow card and an intercept really came at the wrong time of the game for us.”

Foster said the long tour, with an unprecedented 10 tests in 12 weeks, had still produced plenty of positives for the All Blacks, on top of painful lessons that would have to be absorbed. A harsh analyst would note they lost three of their four top-end internationals of the year.

“The one thing you’ve got to do is not get too downhearted by the last two weeks. It hurts like anything and I know we haven’t got the results everyone wants, but I thought tonight we showed better composure in coming back into the game.

“We’ve still got a number of people who are learning what it’s like up here. We’ve learnt some lessons but we’ve got to deal with the pressure game better than what we’re doing at the moment.”

And the All Blacks coach conceded that results over the last few weeks had clearly shown a tilt in the balance of power back towards the north, as well as some steps backwards from his team.

“You couldn’t help but be impressed with the way Ireland and France played. Tonight the formula we had was good but we got swayed away from it in the first half, and conceded a couple of tries we don’t normally concede, because we’ve generally been strong with our lineout maul defence.

“I was delighted with the way we came back and put them under pressure, and we’ve just got to do more of that for longer periods, and not slip away. There was a bit of slipping away from us the last two tests.

“If you look at the balance of it, look at South Africa and Australia and us, we’ve probably all run out of juice a little bit near the end. But, gee, the top six or seven teams in world rugby right now are strong.”

And some even getting stronger.