Welcome for migrants cools in Mexican town weary of caravans 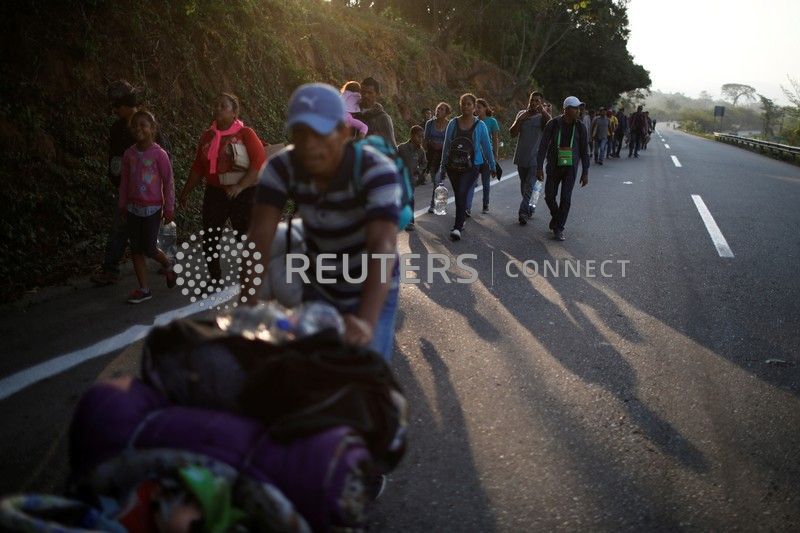 MAPASTEPEC, Mexico (Reuters) – So many migrants have stopped in the southern Mexican town of Mapastepec in recent months that longstanding public sympathy for Central Americans travelling northward is starting to wane.

Hundreds of migrants have been camped out for weeks in Mapastepec, where locals say six migrant caravans have arrived since last Easter. By far the biggest was a group of thousands in October that drew the anger of U.S. President Donald Trump.

Ana Gabriela Galvan, a local resident who helped to provide food to migrants in the October caravan, told Reuters the small town in the impoverished state of Chiapas, which borders Guatemala, felt overwhelmed by the number of Central Americans.

“It’s really bad, because they’re pouring onto our land,” she said, noting that some locals were reluctant to leave their homes. “They ask for money, and if you offer food, they don’t want it; they want money and sometimes you don’t have any.”

Following a surge in apprehensions of Central Americans trying to enter the United States, Trump last month threatened to close the U.S.-Mexico border if the Mexican government did not stop illegal immigration right away.

The administration of President Andres Manuel Lopez Obrador has stepped up migrant detentions and tightened access to humanitarian visas, slowing the flow of caravans north and leaving hundreds of people in Mapastepec.

The humanitarian visas allow migrants to stay temporarily and get jobs. The documents also make it easier for them to travel through the country or seek longer residence.

According to government social development agency Coneval, Chiapas in 2015 had the highest poverty rate of Mexico’s 32 regions, at 72.5 percent. Some 20,000 people live in Mapastepec, the seat of a municipality of the same name where poverty levels were fractionally higher than the state average in 2015.

A month ago, a large knot of migrants began forming in Mapastepec when the National Migration Institute closed its main office in the nearby city of Tapachula. The closure prompted hundreds to travel north to the sweltering town on the Pacific coast where the agency has a smaller outpost.

Since then, bedraggled groups of men, women and children have been staying in and around a local sports stadium, hoping to be issued humanitarian visas.

Central Americans today make up the bulk of undocumented migrants arrested on the U.S. border.

Southern Mexico has long sent thousands of migrants north and support for them has traditionally been strong there. Concentrations of Central American migrants on Mexico’s northern border caused tensions in the city of Tijuana when caravans arrived late last year.

Recent studies show that while Mexicans still have sympathy for migrants, many are concerned that Mexico will not be able to cope with the arrival of thousands of people from Honduras, Guatemala and El Salvador fleeing violence and poverty at home.

A survey of around 500 adults in February by the Center of Public Opinion at the University of the Valley of Mexico (UVM) found that 83 percent of respondents believed the Central American migrants could cause problems for Mexico.

Rising crime, increased poverty and a decline in social services were the top risks identified by the poll.

The study did not publish a margin of error.

Jesus Salvador Quintana, a senior official at the National Human Rights Commission, said in Mapastepec the body had noticed a decrease in assistance from the public but urged people to keep helping the migrants on their often arduous journeys.

“There are children, pregnant women, whole families that sometimes need this humanitarian aid,” he told Reuters.

Anabel Quintero, a young Honduran mother in Mapastepec, said when her caravan passed through the nearby town of Huixtla some shops closed rather than sell to migrants seeking medicine for sick children.

“It’s a bad feeling,” she said. “They told us they didn’t want us sleeping in the park, and we had to leave.”

Residents of Mapastepec are also running out of patience.