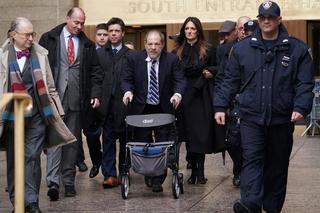 NEW YORK (Reuters) – A lawyer for Harvey Weinstein on Thursday took aim at the credibility of the women accusing the former movie producer of sexual assault and urged jurors in the closing arguments of his New York trial to acquit him.

Weinstein, 67, has pleaded not guilty to sexually assaulting former production assistant Mimi Haleyi in 2006 and raping Jessica Mann, a onetime aspiring actress, in 2013.

Weinstein’s defense lawyer Donna Rotunno began by telling the jurors to use their common sense in evaluating the evidence.

The jury is expected to hear the prosecution’s closing argument on Friday in the trial that began more than a month ago.

The trial is a milestone for the #MeToo movement in which women have accused powerful men in business, entertainment, media and politics of sexual misconduct.

Since 2017, more than 80 women have accused Weinstein of sexual misconduct.

The former producer, who was behind films including “The English Patient” and “Shakespeare in Love,” has denied any nonconsensual sex.

Rotunno said during closing arguments it was “disingenuous” for prosecutors to argue that the six women who testified at Weinstein’s trial had acted independently.

“In October 2017, the biggest story in the world was about Harvey Weinstein,” she said, referring to the first news reports about allegations against Weinstein. “They all knew that story.”