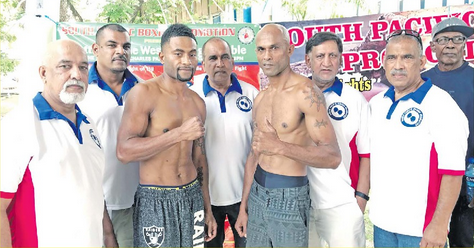 THE Fiji middleweight title fight in the South Pacific Boxing Promotions Program at Prince Charles Park in Nadi this evening hangs in the balance after defender Sebastian Singh tipped the scale 2.55kilograms heavier than the contract weight required for the bout against Siliveni Nawai.

At the weigh-in at Nair Dais in Nadi yesterday, Singh, who is known as ‘The Sniper’, weighed 74.55kg while his opponent Nawai weighed 71.06kg.

The contract weight for the fight was set at 72kg.

There was a lot of commotion following the weigh-in with frustration shown by the Nawai camp after Singh was overweight.

Discussions were held by the Boxing Commission of Fiji executives and the officials from both camps however no amicable solution was found when this edition went to press.

BCF Western director Usman Ali said they would try their best to accommodate the bout as a contest but not as a title fight.

Ali said there were a lot of things to resolve and the bout could go on if both camps agree to the weights with the most important factor being the prize purse.

“But regarding the title, we just can’t put up because of the weight issue,” he said.

“We also have to look at the perspective that Nawai came prepared for the weight to challenge for the title and the titleholder should have been on the right weight to defend his title.

“I will note this with our referee and judge from New Zealand, Faiyaz Khan, and let the BCF to come to a decision.”

Ali said Singh was the titleholder but he cannot defend the title on his current weight.

“At present there are not enough members in the BCF so a decision may take time,” he said.

“What we need to clarify now is the status of the middleweight titleholder. Sebastian is the titleholder but he can’t defend it with his weight.

“It can go on as a contest if both parties agree. We will let all the parties come to us and we will explain them the rules. This is the middleweight category and Sebastian should not exceed the weight but he is over 74kg.

“The BCF will make the final decision.”

The vacant Fiji super middleweight title between Abhay Singh and Tomu Gaunavou will go ahead as planned.

The gates will open at 3pm.