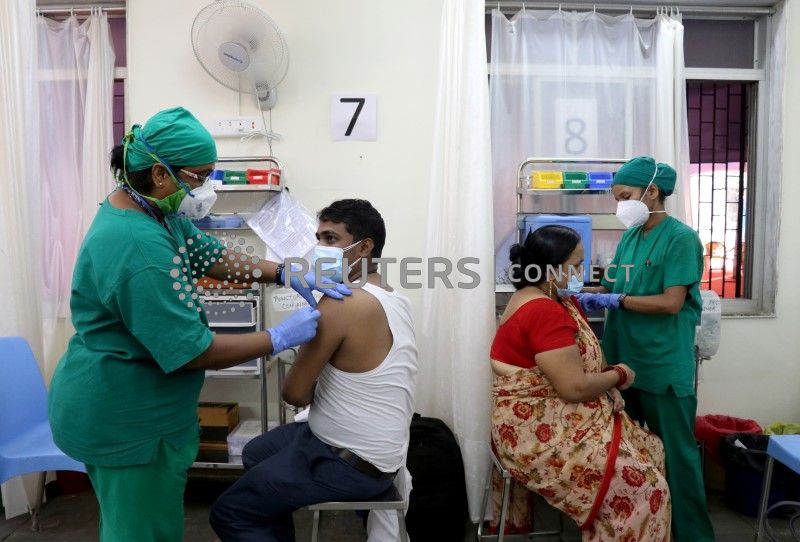 Rohit Gupta, 27 and Nandani Gupta, 42, receive their first dose of COVISHIELD, a coronavirus disease (COVID-19) vaccine manufactured by Serum Institute of India, at a vaccination centre in Mumbai, India, May 3, 2021. REUTERS/Niharika Kulkarni - RC298N9X1YD0

MUMBAI (Thomson Reuters Foundation) – Between taking orders and handing over parcels of sushi and papaya-mango salad to delivery boys, Indian restaurant manager Padam Vibhushan has fruitlessly hunted online and in hospitals for a COVID-19 vaccine slot since he became eligible on May 1.

The 43-year-old is among many in Mumbai who are stuck at the back of the vaccination queue because they do not have a fancy address or a corporate employer to help protect them from a pandemic that has killed some 380,000 Indians.

Life is easier for the residents of sprawling apartment block complexes and staff at major banks and information technology firms who are getting the jab on their premises, amid widening vaccine inequity in India’s most populous metropolis.

“As long as I wasn’t in the eligible category for the shot, I was not so desperate. But after it opened for my age group, I thought I would get it within a fortnight,” Vibhushan told the Thomson Reuters Foundation.

“My restaurant has remained open for delivery through the second wave and I interact with 30 to 40 people every day. I think the vaccine would ease the stress I feel,” he said.

“I work about 15 hours, wearing a mask all the time. I just want to breathe,” said Vibhushan, who has no one to lobby for a vaccine on his behalf as he lives in a standalone building with few residents and works for a small business.

With the world’s second-highest tally of infections, India’s federal government has faced criticism for a bungled vaccine roll out that has covered fewer than 5% of an estimated adult population of 950 million.

India began vaccinating frontline workers and over 60s against COVID-19 in January but hit a hurdle in May when all adults became eligible for a jab, amid major supply shortages.

The federal government said it would buy 50% of available stocks from manufacturers each month to vaccinate the elderly and frontline workers for free, and let private hospitals and state governments compete for the other 50%.

But city authorities soon found they were unable to procure enough vaccines and rapidly scaled back their plans – with the financial capital, Mumbai, only offering vaccines for over 45s.

Meanwhile, private hospitals were enlisted by local leaders and civic officials to hold vaccination drives at big apartment complexes, offering jabs to those who could afford to pay about 1,000 to 1,500 rupees ($14 to $21) per dose.

“It took me 30 minutes to get the shot. We couldn’t have asked for more,” said businessman Jayesh Mantri, 43, who got vaccinated with his wife at a camp for residents of their apartment block.

“I would prefer the second shot the same way,” he said, adding that it had been impossible to secure a slot on the government mobile application for vaccination bookings.

In Mumbai, private hospitals accounted for 570,000 of the 620,000 vaccine doses administered to 18- to 44-year-olds, data from the civic body shows, with the remaining 50,000 doses given by the state to priority groups like students studying abroad.

How have vaccination drive organisers been able to procure the sought-after shots when state governments cannot?

Kotecha said he has been holding other camps in big apartment blocks and soon plans to offer vaccines in smaller units to under 45s who are not eligible for state vaccinations.

“About 90% of the 18- to 44 year-olds in Mulund will be vaccinated by mid-July,” said Kotecha, referring to the central Mumbai suburb that he represents.

Supporters of the private vaccine roll out say that it can reach more people faster and reduces pressure on the government.

But critics say the main reason private hospitals have been more successful than states in procuring vaccines is because they pay manufacturers twice as much – 600 rupees a dose.

Outcry over the shortages of vaccines at state facilities, while private hospitals were offering jabs for a fee at dozens of big residential complexes and firms, forced a government u-turn last week.

Prime Minister Narendra Modi announced that the federal government would from June 21 take over vaccination procurement from the states and give free vaccines to all adults, delivered via state-run vaccination centres.

Modi said private hospitals will still be allowed to buy 25% of vaccine supplies but could not charge more than 150 rupees over the cost of the dose.

Some of Mumbai’s more affluent residents are helping those less fortunate. Apartment blocks overlooking the ocean at Nepean Sea Road, one of the city’s plushest addresses, recently held a vaccination drive which included nearby slum dwellers.

“Slums don’t have access to private medical facilities and they are finding it difficult to get vaccinated,” said Mukul Mehra, secretary of the Nepean Sea Road Citizens’ Forum.

The forum reserved 3,000 doses for slum dwellers, out of the 8,000 doses it booked with a private hospital, Mehra said.

Restaurant manager Vibhushan said he did not begrudge the wealthy and connected getting the shot first “but it is no solution if only big companies get it and not all labour unions or roadside vendors”.

Mumbai officials were hopeful improved supplies will soon allow them to offer jabs to the under 45s.

“We are dividing the 18 to 44 age group into categories to first vaccinate those who come into contact with people,” said Suresh Kakani, a commissioner with Mumbai’s governing civic body, Brihanmumbai Municipal Corporation.

“We have collected information on taxi, auto rickshaw and bus drivers, vegetable and street vendors. We are targeting them and we are preparing a database to start their vaccination in a staggered manner.”