‘We need drinking water and milk for the kids’ 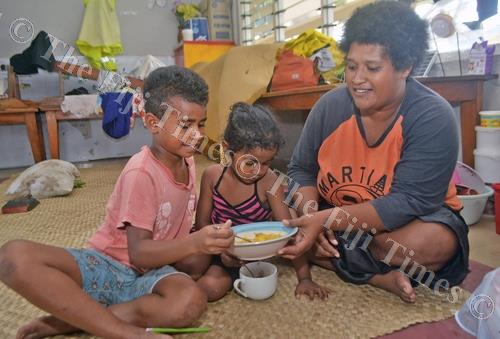 ONE week after they sought shelter at Natabua Primary School, more than 120 residents from Taiperia settlement at Natabua Seaside, Lautoka, are back there again.

Evacuee Vasemaca Marananiyatu said they did not expect to be forced to flee their homes so soon.

“It’s like a bad dream. We sought shelter here from Easter Sunday until Wednesday and now we are back again,” the 23-year-old said.

The single mum said while grown-ups were relatively OK, there were concerns about the children.

“We need drinking water and milk for the kids.”

“Most of the people in Taiperia rely on farming to survive and the two floods this week have destroyed all our crops.”

Meanwhile, residents of Lovu Seaside Lautoka, are thanking police for coming to their rescue on Friday night after floodwaters entered their homes.

“At 4pm it started raining heavily and by 6pm the water came up very fast,” she said.

“Some people went ahead to the evacuation centre while some of us tried to move our belongings to higher parts of the house.

“We were still doing this when police came at 8pm to take us.

“By then the water was up to waist-level.”

Sereana Naivou, the community liaison representative for the Lovu Seaside evacuees, said there was an urgent need for clean drinking water and milk and food for children.

“We need things like milk, drinking water and Weet-bix for the kids and everyday essentials like toilet paper, matches and mosquito coil because there are a lot of mosquitoes and risk of people getting dengue.”

More than 120 people are sheltering at Lovu Sangam Primary School on the Kings Rd just outside of Lautoka.