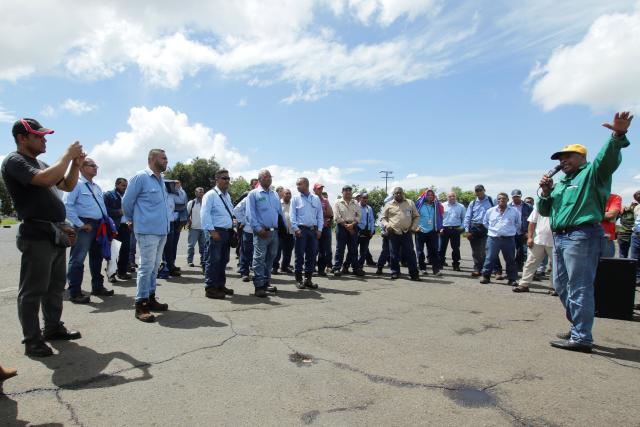 Last month, Maduro unexpectedly ordered a 60-fold increase in the minimum wage to compensate for runaway inflation alongside a 96 percent devaluation of the bolivar currency. That left employers across Venezuela struggling to afford the new minimum wage, let alone the higher salaries once paid to more senior employees.

So the Experimental Pedagogical University where Arcaya works is now paying her and all its employees the monthly minimum wage of 1,800 bolivars, roughly $18 at the black market exchange rate and up from about $2 previously.

Frustrated, the 39-year-old now dreams of fleeing the South American country, like millions of other Venezuelans.

“We all earn the same. I earn the same as the girl who presses a button to open the door,” said Arcaya, who has worked at the university for 19 years. “I studied and I worked hard. And now it turns out none of that was worth it.”

Workers at hospitals, the Oil Ministry and insurance companies all said the pay hierarchy had been distorted following Maduro’s shock measure.

The president, who was re-elected to a new six-year term in May at elections boycotted by most opposition parties, said the reforms would shore up oil-rich Venezuela’s moribund economy, which the International Monetary Fund estimates will shrink 18 percent this year.

But the measure could further hollow out government institutions and private companies, as Venezuelans seek jobs in the more flexible informal sector or flee to neighboring South America countries.

Once one of the wealthiest nations in Latin America, Venezuela has seen its economy unravel and violence steadily mount during two decades of socialist rule under Maduro and his predecessor Hugo Chavez, who launched his Bolivarian Revolution in 1999.

It is unclear how many of Venezuela’s roughly 13 million workers earn the minimum wage. The roughly 40 percent of Venezuelan workers who work in the informal sector will not be directly affected by the change.

Yet teachers, doctors and government workers have staged protests to decry the lack of measures to ensure they earn more than the minimum, especially in the face of hyperinflation that the opposition-led congress estimates has reached 200,000 percent.

While minimum wage earners are getting more, their money has to stretch farther due to inflation.

“We used to earn a lot less,” said Juan Pereira, a security guard at a mall in the city of Valencia, once a thriving industrial hub. But he said the problem was that rampant inflation was eroding the value of the bolivar currency.

“What surprises me is that everyone speaks about 1,000 bolivars now as if it were nothing. A pair of shoes, repairing the fridge, spare parts for the motorcycle – everything is 1,000 as if it were that easy to earn.”

And for many skilled Venezuelans, the psychological hit of earning the same as everyone else has sapped morale and shaken up the pecking order.

“No one is going to worry about hierarchies like director, sub-director, or supervisor now because it is pointless to have more responsibilities and earn the same,” said Ildemaro Useche, the president of the Venezuelan Teachers Union’s for the Andean state of Tachira.

Pay differences have also shrunk in Venezuela’s army and banks. Staff at Venezuela’s central bank even sent a complaint letter to its president, Calixto Ortega.

“The system that is being implemented is incoherent, worsens the situation for active and retired workers and violates current laws,” said the letter seen by Reuters.

Venezuela’s central bank did not respond to a request for comment.

At the Oil Ministry, which oversees Venezuela’s vital energy sector, all employees are now paid minimum wage, according to two ministry workers.

Next door at state oil company PDVSA, workers say the new wages have not yet been announced and the company has instead been paying one-off bonuses, according to union leader Jose Bodas and two employees.

Oil accounts for over 90 percent of Venezuela’s foreign currency earnings, bankrolling the government, but production has fallen some 36 percent over the past year to 1.2 million barrels per day amid underinvestment, lack of maintenance and a brain drain.

The Oil Ministry and PDVSA did not reply to requests for comment.