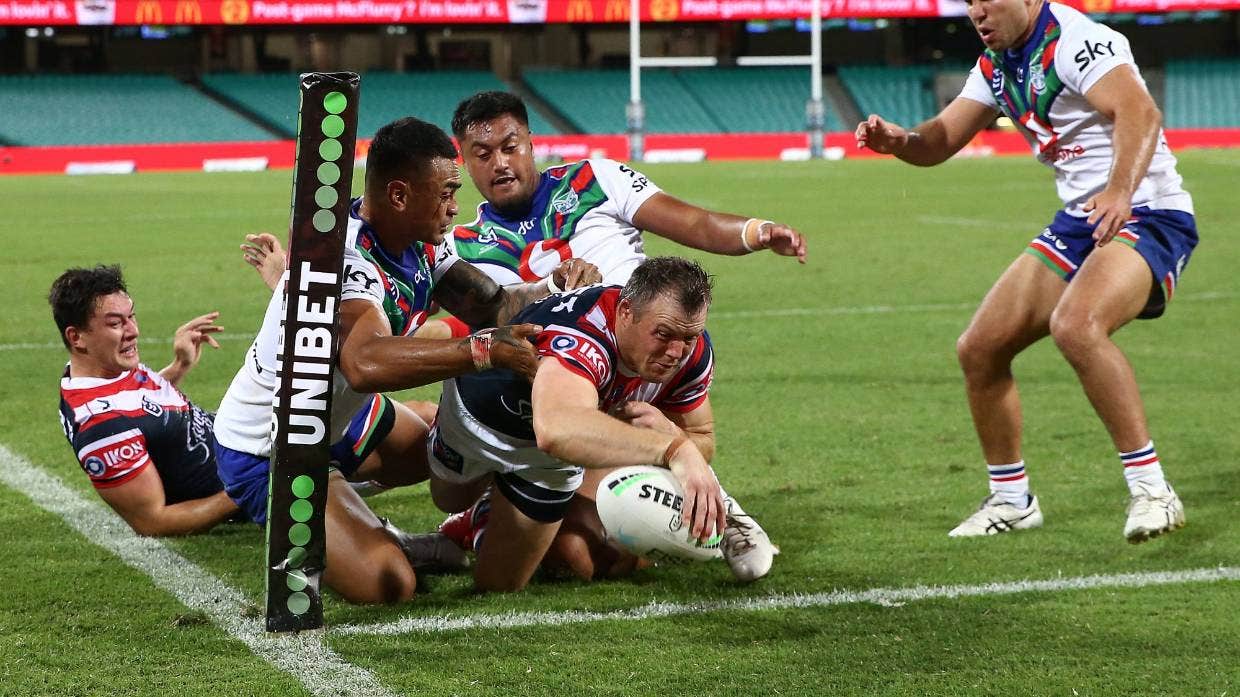 Brett Morris scores in the corner as the Roosters started to take control oof the game towards the end of the first half. JASON MCCAWLEY/GETTY IMAGES

The Warriors fell short against the Roosters at the Sydney Cricket Ground on Sunday night, losing 32-12

The defeat leaves the Warriors with two wins and two losses for the season and they remain outside the top eight because of points differential.

The scoreline blew out in the end, but this really was a game the Warriors really could have won. In the first half they matched the Roosters up the middle, with Tohu Harris in particular having a monster game.

However, on attack they were severely lacking. Both halves, Sean O’Sullivan and Kodi Nikorima were able to put up good kicks on the last tackle, but so often a Roosters defender was first to the ball.

There were also now too many of those annoying errors, that have frustrated Warriors fans so much in the past.

It must also start to be of a concern that after four games, wingers Ken Maumalo and David Fusitu’a have scored just one try between them. In 2018 Fusitu’a scored 22 tries, while Maumalo had 17 in 2019, but this season they’re getting so few opportunities.

After weathering an early storm, the Warriors marched downfield, helped by a big run from Addin Fonua-Blake and ended up scoring a try when Adam Pompey caught a kick in goal from Nikorima.

But there was bad news for the Warriors in the 14th minute when Fonua-Blake limped from the field after hurting his knee.

A couple of minutes later Roger Tuivasa-Sheck broke up the middle of the field, he then passed the ball to Nikorima and pointed for him to run under the posts, but before he could get there Brett Morris dragged him down to save the try.

That great defensive effort sparked the Roosters into life and James Tedesco fended off Nikorima and raced 30m to score.

But the Warriors hit back in the 22nd minute when Tuivasa-Sheck put through a grubber kick that Harris was the first to reach, giving his team their second try of the night.

The Roosters had another try a few minutes later as the Warriors struggled to defend back to back sets on their goal line and eventually Nat Butcher scored.

The pressure continued on the Warriors defence, not helped by Tuivasa-Sheck knocking the ball on, into the hands of Fusitu’a and the Roosters soon after had their third try, with Brett Morris going in.

The Warriors were scrappy at the start of the second half, making mistakes and turning over the ball on attack.

That was the real difference between these teams as the Roosters didn’t have the same problem in converting pressure into points in the first half and to rub the Warriors’ noses in it, after soaking up loads on their line, they quickly went down the other end and Brett Morris got his second try of the night and ninth of the season.

Drew Hutchison caught hold of a ball that bounced off Tuivasa-Sheck’s arm to run in for the Roosters’ next try.

With 10 minutes to go Maumalo almost scored, but put his hand on the line when diving by the corner flag.

Before the game ended, Josh Morris joined his brother on the scoresheet, to add more misery to the Warriors’ night.