Walmart massacre in Texas investigated by authorities as domestic terrorism 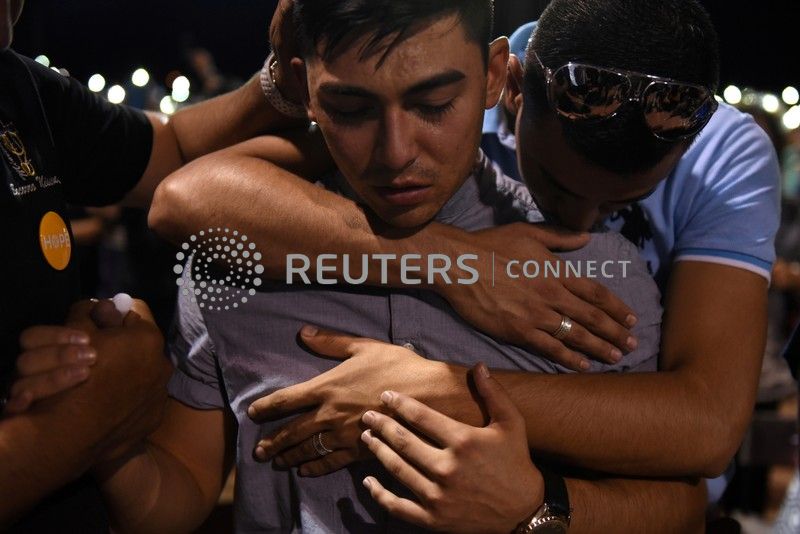 A group of men embrace during a vigil a day after a mass shooting at a Walmart store in El Paso, Texas, U.S. August 4, 2019. REUTERS/Callaghan O'Hare TPX IMAGES OF THE DAY

EL PASO, Texas (Reuters) – U.S. authorities investigating what drove a young man from the Dallas area to kill 20 people at a Walmart store hundreds of miles away in the border city of El Paso said on Sunday they are treating it as a case of domestic terrorism.

Texas Governor Greg Abbott said Saturday’s rampage appeared to be a hate crime, and police cited a manifesto they attributed to the suspect as evidence that the bloodshed was racially motivated.

The FBI said in a statement on Sunday the attack “underscores the continued threat posed by domestic violent extremists and perpetrators of hate crimes.”

The bureau said it remains concerned that more U.S.-based extremists could become inspired by these and previous high-profile attacks to engage in similar acts of violence.

“The FBI asks the American public to report to law enforcement any suspicious activity that is observed either in person or online,” the bureau said.

A state prosecutor said they will seek the death penalty for the suspect, Patrick Crusius, 21, of Allen, Texas.

The U.S. attorney for the western district of Texas, John Bash, said federal authorities were treating the massacre as a case of domestic terrorism.

“And we’re going to do what we do to terrorists in this country, which is to deliver swift and certain justice,” Bash told reporters at a news conference on Sunday.

He said the attack appeared “to be designed to intimidate a civilian population, to say the least.”

The shooting happened just six days after the last major outbreak of U.S. gun violence in a public place – a food festival in California where a teenager killed three people with an assault rifle and wounded a dozen others before taking his own life in a hail of police gunfire.

The Texas killings were followed just 13 hours later by another mass shooting in Dayton, Ohio, where a gunman in body armour and a mask killed nine people in less than a minute and wounded 27 others in the city’s downtown historic district before he was shot dead by police.

Trump told reporters he would make a statement on Monday morning about the shootings.

“Hate has no place in our country, and we’re going to take care of it,” Trump said. “This is also a mental illness problem, if you look at both of these cases. These are really people that are very, very seriously mentally ill.”

He had previously said on Twitter that the El Paso massacre was “an act of cowardice.”

Police said the El Paso shooting suspect opened fire with a rifle on shoppers, many of them bargain-hunting for back-to-school supplies, then surrendered to officers who confronted him outside the store.

A police spokesman said on Sunday that the names of the victims would only be released when relatives had been informed, and he said he had no estimate for how long that would take.

“He basically didn’t hold anything back,” Allen said at Sunday’s news conference, but declined to elaborate.

Crusius comes from Allen, Texas, a Dallas suburb some 650 miles (1,046 km) east of El Paso, which lies along the Rio Grande across the U.S.-Mexico border from Ciudad Juarez.

A four-page statement posted on 8chan, an online message board often used by extremists, and believed to have been written by the suspect, called the Walmart attack “a response to the Hispanic invasion of Texas.”

It also expressed for support for the gunman who killed 51 people at two mosques in Christchurch, New Zealand, in March.

El Paso and Ciudad Juarez, together with the neighbouring city of Las Cruces, New Mexico, form a metropolitan border area of some 2.5 million residents constituting the largest bilingual, bi-national population in North America.

Amid reports on social media that some undocumented victims of the shooting might have been reluctant to seek medical aid, U.S. Customs and Border Protection sought to put them at ease.

“We are not conducting enforcement operations at area hospitals, the family reunification centre or shelters,” CBP West Texas said on Twitter.

Immigration and Customs Enforcement (ICE) also said its men and women stood with El Paso. “Despite false rumours to the contrary, ICE does not conduct immigration enforcement operations during tragedies,” ICE said in a statement.

The Mexican government said seven Mexican nationals were among the 20 people killed in the shooting, and at least six others were among 26 wounded.

Foreign Minister Marcelo Ebrard said Mexico would consider litigation that could lead to the extradition of the gunman. “For Mexico, this individual is a terrorist,” he said.

The carnage ranked as the eighth-deadliest mass shooting in modern U.S. history, after a 1984 shooting in San Ysidro, California, that claimed 21 lives.

Television station KTSM-TV published two photos it cited a law enforcement source as saying were security-camera images of the suspect as he entered the Walmart, wearing eyeglasses, khaki trousers and a dark T-shirt, and wielding an assault-style rifle. He appeared to be wearing headphones or ear protection.

Representative Veronica Escobar, a Democrat who represents El Paso in the U.S. Congress, welcomed the news that the massacre was being investigated as domestic terrorism.